Driver arrested for using criminal force against public servant: His car hit bus after crashing through road divider and 4 lanes 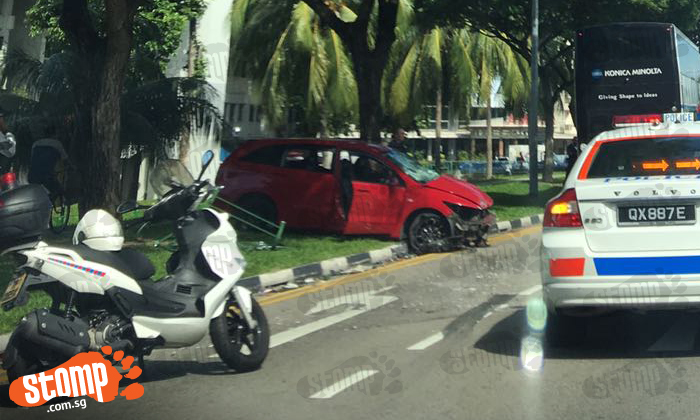 A Honda driver was arrested after an accident along Eunos Link Road this morning (Sep 23) at around 9.30am.

Stompers Jolene and Anonymous had shared photos of the accident via WhatsApp while Stomper Tu also emailed Stomp a video.

The red Honda had crashed through a road divider and across four lanes before hitting a bus full of commuters.

"The red car skidded and crashed into a bus. It then landed on the pavement."

Stomper Tu, who said he was surprised to see so many police officers at the scene, added:

No one was injured in the accident.

According to The Straits Times, the car's 38-year-old driver was seen shouting at and pushing officers who had rushed to the scene.

He had to be restrained by three Singapore Civil Defence Force (SCDF) paramedics and lay on the ground for nearly 30 minutes as they spoke to him.

The driver was subsequently arrested for using criminal force against a public servant, said the police.

A witness told The Straits Times that the man was 'driving very fast' and that the accident 'happened within seconds'.