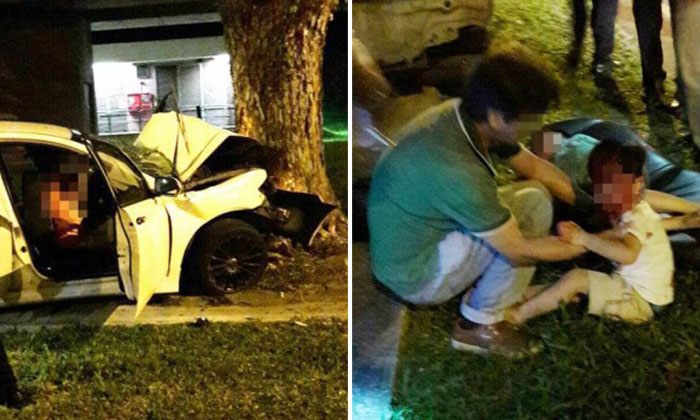 A 33-year-old woman died after her husband drove the car they were in into a tree on Lentor Avenue on Tuesday (June 14) early morning.

She was pronounced dead at the scene by paramedics, the Singapore Civil Defence Force (SCDF) said.

Their sons, aged three and six, were taken to KK Women's and Children's Hospital.

The six-year-old had spinal injuries while the younger boy suffered from head injuries, SCDF said.

The 42-year-old driver was taken to Khoo Teck Puat Hospital where he was later arrested for causing death by a rash act, said police.

He and his younger son were seriously injured, reports said.

The accident happened at around 1.15am at the junction of Lentor Avenue towards Ang Mo Kio Avenue 6.

More than 10 motorists stopped their vehicles to help, Lianhe Wanbao reported. Some deflated the airbag and pulled the driver out from the car; some helped to direct traffic, while others comforted the boys.

The woman victim was sitting in the backseat of the car and hit her head as she was flung forward, Wanbao said quoting an eyewitness.

Her sons were both crying that they wanted their mother, the witness added.