Car which flew out of car park and crashed into Woodlands lift lobby: Driver stepped on wrong pedal 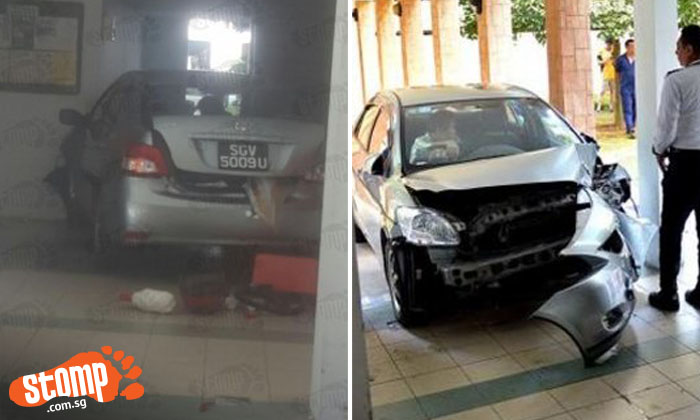 The car that flew out of a car park and crashed into a lift lobby at Block 791 Woodlands Avenue 6 was found to have been driven by a man in his 60s who mistook the accelerator pedal for the brake.

Stompers Zander and Noor had come across the bizarre accident that took place on Friday (Sep 16) at around 3pm.

In a telephone interview with Stomp, the Stomper said that a man had driven his car through a walkway from a nearby multi-storey car park and crashed into the void deck of the above mentioned HDB block.

The silver-coloured car ended up at a lift lobby beside a flight of stairs.

No one was at the lift lobby when the accident took place, said Zander.

Noor also sent in multiple photos of the incident.

The Straits Times reported that a man in his 60s was found to have minor injuries, but refused to be taken to hospital.

According to the The New Paper on Saturday (Sep 17), the driver had continued to step on the accelerator as the car sped through a narrow 10m walkway, resulting in the crash at the lift lobby, 20m from a childcare centre and playground.

Mr Tan was parked across the flight of stairs at about 3pm on Friday when he stepped on the wrong pedal while driving off.

No one else was injured except for the driver, Mr Tan, 62, who escaped with some minor scratches on his wrist.

"I stepped on the accelerator instead of the brake, and the car flew forward," Mr Tan told The New Paper.

"It was a scary experience."

The car flew from the multi-storey carpark at Block 792A, Woodlands Avenue 6 to the lift lobby of Block 791, where it was 'landed' in a narrow walkway next to a staircase.

Residents who were interviewed were relieved that no one was injured, as there were many kids and wheel-chair bound elderlies in the area.

A police spokesperson said they were alerted to the accident at about 3.15pm, and no injuries were reported.