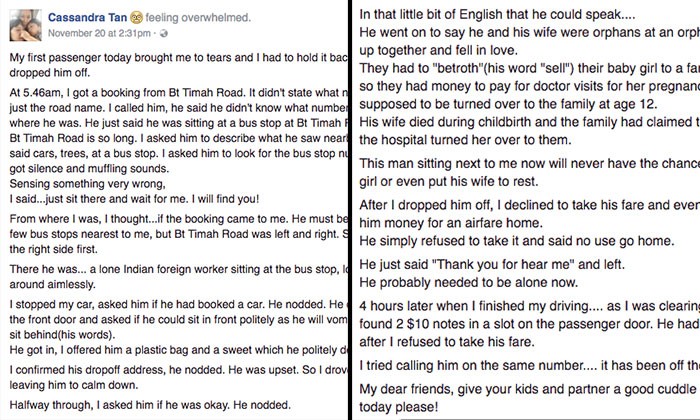 An Indian worker with little proficiency of the English Language told his driver, Cassandra, about how he lost two of his family members at once on Nov 20 at around  5:45am.

According to Cassandra's Facebook post, he was her first passenger of the day and he was at Bukit Timah.

Cassandra asked for a bus stop number or anything that gives her more information on his location however, she only got a muffled sound.

She tried her luck, went to the nearest bus stop to her and found him.

He asked very politely if he could sit in the front seat because he would vomit if he sat at the back.

He was visibly upset and when they got into a conversation, you will never believe what has happened to his family and how much he had lost.

View the gallery above to read his heart-breaking story.

After hearing his story, Cassandra refused to take his money.

However, she found the two $10 notes slot on the passenger door.

She called him a few days later and he said that he received money from his boss but to also not contact him via that number again.