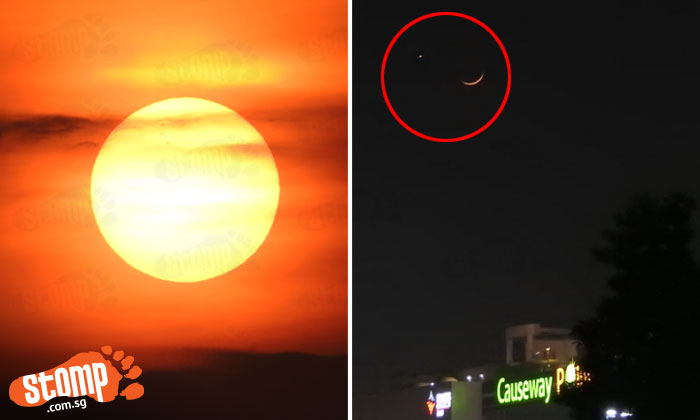 Stomper Kannan shared with Stomp some gorgous photos he took two days ago in Woodlands.

He gave a description of what he took in an email to Stomp:

"About an hour after the sunset, the waxing crescent moon appeared together with the planet Venus low in the West skies of Singapore.

"Venus was very bright and could be seen clearly with the moon with the naked eye.

"Those who wished to see this spectacle over the next few nights are suggested to look West, in the direction of sunset about one hour dusk.

"Planet Venus is said to be visible in the night sky until March 2017.

"Also, during the night, Mars and Saturn shine together with the star Antares.

"Stargazers may be able to see all these planets without the aid of any telescope or binoculars.

"Venus and Saturn will appear together again on 30 October 2016.

"These pictures were all captured around one location at Woodlands Avenue 5 after sunset  and during nightfall.

"So long as the skies are clear, the sighting of these planets are highly possible.

"Earlier in the morning, we were greeted by the Altocumulus Clouds after sunrise.

Related Stories
Waterspout spotted at East Coast Park: Check out all the beautiful pictures and videos by Stompers
More About:
beautiful
amazing
moon