Catch Venus, Mars and Saturn in Singapore skies this September 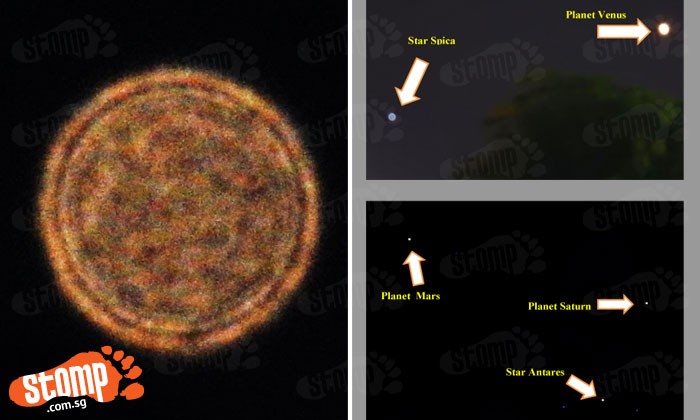 Into stargazing or astronomy? Well we bring good news.

According to Stomper Kannan, this September is a great month for celestial sightings in the skies of Singapore.

Due to the current weather, planets Venus, Mars and Saturn are visible to the naked eye.

"These planets are expected to be seen throughout the month of September with Venus set to appear as the brightest planet till November 2016.

"Some of the brighter stars like Spica, Rigel Kentaurus and Hadar are also clearly visible at night after sunset.

"Venus will set around 8.30 pm while Mars and Saturn will stay longer till the wee hours of the morning.

He also shares some tips for those who have an avid interest in such sightings.

"The use of Skyview app on the smartphones will be of great help to locate the planets and stars in the sky. The three planets can be viewed without the aid of a telescope.

"The camera has its limitations, one could not see the fine details of the planets as these objects are so many light years away, with Earth Moon is the only one being closest to us.

According to Kannan, there will be another astronomical event coming up this Thursday (Sep 22) at 10.21pm, known as the September Equinox.

"This will be the second of the 2 equinoxes every year, the first one being in March 2016. The equinox in September is also known as the Autumnal (fall) equinox in the Northern Hemisphere.

"On this day, the sun is said to be shining directly on the equator and the length of day and night is nearly equal in all parts of the world."

Related Stories
Surreal photos of the moon seen in the skies of Woodlands that will leave you mesmerised
Does this photo of the moon taken from Boon Lay remind you of any creature?
More About:
amazing
interesting
beautiful
sky