Simon Yam gets stabbed in stomach while on stage, undergoes 2 surgeries 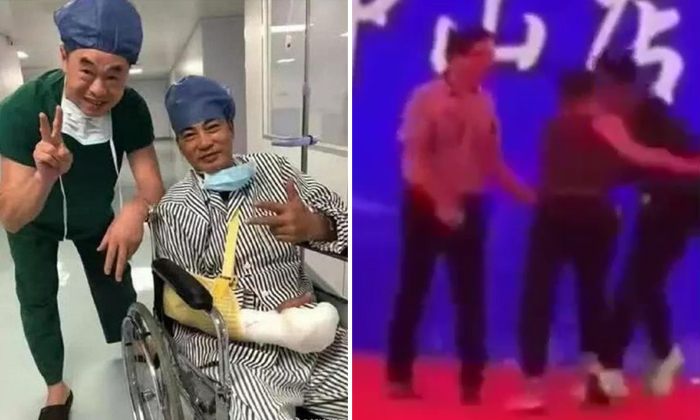 Simon Yam has successfully undergone a second surgery, with his supermodel-wife Qi Qi posting on Sunday (July 21) that the Hong Kong actor is recovering and "doing well".

His family is "cheering him on", she added, after he was stabbed on Saturday (July 20) while he was at a promotional event for a company in Zhongshan in Guangdong province in China.

On stage, he was targeted by a man who stabbed Yam's stomach and slashed his arm with a knife.

After Yam, 64, was treated in a hospital for what his representatives described as minor injuries to his abdomen and hand, he was transferred to Hong Kong's Adventist Hospital on Saturday night.

His representatives said he was more familiar with the doctors in Hong Kong and that it would be easier for his family to take care of him.

There was concern too over whether nerves in his hand had been badly affected.

On Sunday, his wife was spotted at the hospital.

She told Apple Daily that she was waiting for Yam to come out of an operating theatre.

Later, in the afternoon, she posted that the operation had been a success.

His management company has hired three bodyguards to ensure his safety and privacy.

While fans can now breathe a sigh of relief, attention now switches to the 53-year-old attacker, who has been detained by the police, and his motives.

Talk has it that Yam was mistaken for another person whom the attacker had grievances against.

According to the on.cc portal, the attacker is said to be mentally unstable and that he had planned the strike for some time.

The incident has puzzled everyone, given that Yam has a reputation for being a nice guy and is not known to have enemies in show business.

He is also scandal-free, devoted to his wife and their daughter.

The attack has also focused attention on the safety of celebrities when they make public appearances. Veteran actor-director Sammo Hung was cited by South China Morning Post as saying: "It is sometimes dangerous for artists to attend these (promotional) events... it is very difficult to prevent an attack."

While the slashing has come as a big shock, many people are also upset that some folk have tried to cash in.

Yam's representatives issued a warning about scammers trying to get people to contribute to a fund to pay for his operation in China.

The scammers said he did not have quick access to funds in China and hence needed help to settle a 100,000 yuan (S$19,800) bill for the procedure.