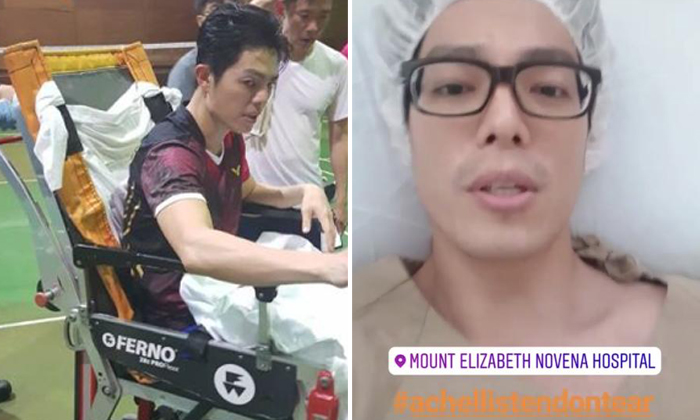 Local actor Zhang Yaodong underwent surgery on Monday evening (Aug 13) at around 6pm, after tearing the Achilles tendon on his left leg during a sports game.

Lianhe Wanbao interviewed him at around 9pm, after he left the operating theatre. Although he appeared to be in good spirits, he was still drowsy from anaesthesia.

Asked how he got injured, Zhang said: "I wanted to break into a sweat after filming last Saturday and went to play ball with a friend in Serangoon.

"When I made a move to jump, I tore my tendon. I felt a sharp pain and couldn't walk at all. Nobody at the scene dared to move me, so we called for an ambulance that conveyed me to Tan Tock Seng Hospital."

According to Zhang, it was 4am when the doctor came to a diagnosis and he was then transferred to Mount Elizabeth Novena Hospital, where he underwent surgery.

Zhang revealed feeling scared when he injured himself and having breathing difficulties.

However, the first thing that came to his mind was not worry over his injury. Rather, he thought: "What to do? This will affect my filming!"

Zhamg, who is currently filming for Channel 8 drama series 'Heart To Heart (心点心)' that is scheduled to air on Dec 24 this year, has already applied for medical leave.

He said: "I did not let many people know about [my injury] because I was afraid that they would be worried. However, I had to let the filming crew know.

"The producer was very considerate and understanding. She said I could shoot my scenes at a later stage and told me to recuperate well."

Zhang has many action-packed scenes in the upcoming drama, including those of him swimming, saving a damsel in distress and being in a car crash.

As such, his injury has left him troubled.

Having injured his elbow while shooting Channel 8 programme 'Gifted 天之骄子' previously, Zhang joked that he was someone who easily got hurt.

Asked about his elbow injury, Zhang said it had yet to heal completely and added: "I went to see a specialist, who also told me to get more rest."

Celebrity pals Terence Cao, Joanne Peh and Qi Yuwu also visited Zhang in hospital to cheer him on and lift his spirits.