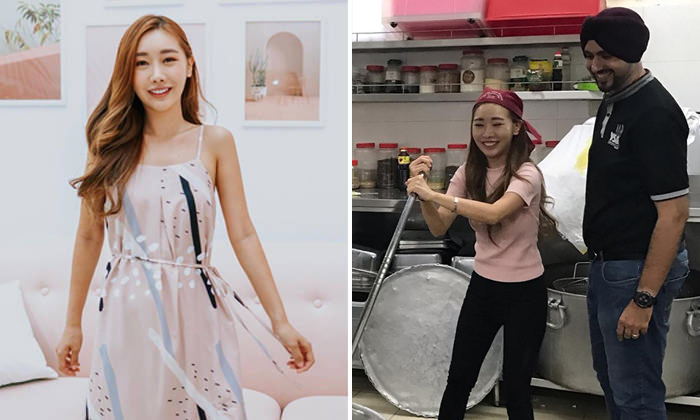 A Singaporean influencer drew flak for an Instagram post that was deemed racially insensitive by netizens, but the saga has come to a heartwarming end.

Sheena Phua, who has over 76,000 followers on Instagram, sparked backlash after posting an Instagram Story about two men who blocked her view of a concert at the Singapore Grand Prix last weekend.

She shared a photo that showed two Sikh men wearing white turbans and wrote in a caption: "Dang! 2 huge obstructions decided to pop out of nowhere."

Phua's post caused an uproar online, with many netizens slamming her for being 'racist', 'ignorant' and insensitive'.

Don't tell me racism in Singapore doesn't exist. 🙄 I do want to know what's Sheena Phua's response if a 6ft non-turbaned man comes in front of her. 🙄 pic.twitter.com/YDbtpC0T9r

Phua later addressed the controversy on Instagram and said she had received "a lot of flak and hate regarding this as it has been perceived and interpreted to be racist and culturally insensitive".

She added: "I would like to assure the Sikh community that this is not the case and that my message has been misinterpreted.

"I apologise for the distress it has caused." 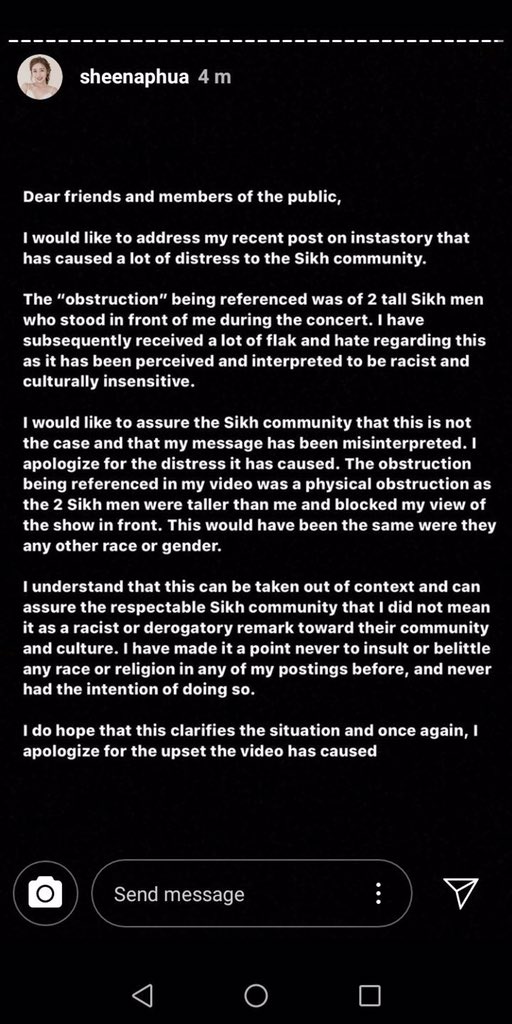 Phua also clarified that she had been referring to a "physical obstruction" due to the two men being taller than her and therefore blocking her view.

"This would have been the same were they any other race or gender," she said. 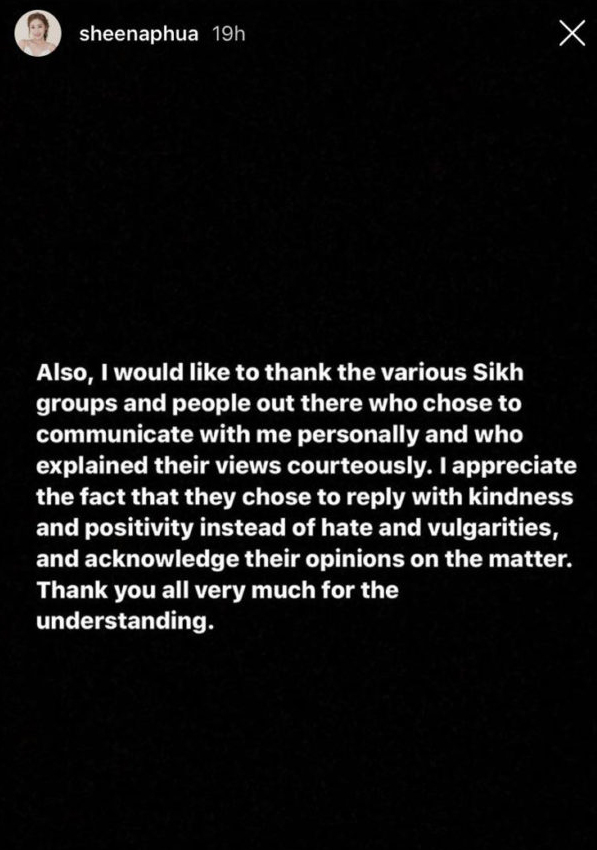 However, some felt that Phua's post was uncalled for to begin with, regardless of its undertones.

YouTuber Pretti Nair, who was embroiled in a controversy over an online rap video last month, weighed in and said: "The only thing that’s obstructing your view here is your privilege," adding that Phua could have simply moved to a better spot.

oh no sis, the only thing that’s obstructing your view here is your privilege 🤭 pic.twitter.com/JaV7IZzSF5

hm it’s kinda some form of privilege when you have the audacity to take a picture of someone, call them an obstruction when u r at a concert & post it up for ur 70k followers on IG instead of moving to a better spot, like life really isn’t that hard imo when the solution is: move https://t.co/aP5dFuZ8lL

But it seems that this influencer saga has reached a heartwarming conclusion after the Sikh community in Singapore decided to respond with kindness instead.

The Young Sikh Association of Singapore said in a Facebook post on Saturday (Sep 28) that while people both inside and outside their community had demanded an apology, they felt that "actions speak louder than words".

As such, they offered Phua the opportunity to visit one of their Gurdwaras and learn more about the community, which she accepted.

The Facebook post said : "When we met, Sheena also shared about her community and some of her experiences growing up in Singapore.

"By her own admission, she shared that she didn't know much about the Sikh community. She didn’t have or know of any Sikhs who may have been at school with her.

"Now that we know her better, would it still be fair to say that she should have known better when she initially put up her post that some found offensive?"

The post also encouraged people to reach out in friendship instead of "reacting based on emotions and pointing fingers to blame" when mistakes are made.

"We are grateful @sheenaphua you made the time to meet us this weekend and hopefully enjoyed what we feel was a meaningful experience for all of us!" added the post.

Related Stories
Influencer-DJ shares how phone was stolen by men who used molest as diversion tactic in Bali
Xiaxue gets threats and verbal abuse after posting video of her Rosmah Halloween look
Tosh Zhang steps down as Pink Dot ambassador after outcry over derogatory tweets
More About:
racist
blogger
influencer
inappropriate
instagram
controversial