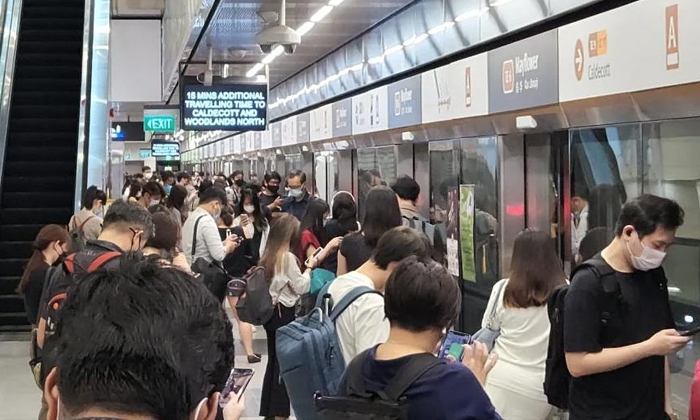 In a tweet at 8.40am, SMRT said there was no train service along the nine-station stretch between Woodlands North and Caldecott in both directions on Singapore's newest MRT line.

This was about 15 minutes after the rail operator first reported the signal fault on Twitter, and said trains on the line were moving slower.

Free regular bus services and bridging bus services have been made available between Woodlands North and Caldecott MRT stations, SMRT said in another tweet.

Commuters on board the six stalled trains were able to disembark safely at their nearest stations, SMRT said, without specifying how many commuters were affected or how long they were stuck in the trains for.

There was full lighting and ventilation in the stalled trains while the commuters were on board, the transport operator added in its post.

SMRT said it has deployed engineers to rectify the issue, as well as additional staff to help with crowd management.

“We are sorry to have affected commuters’ peak-hour journeys,” SMRT said.

This is the third signal fault on the TEL in recent months.

On April 27, 50 commuters were stuck in a stalled train between Woodlands and Woodlands South stations for more than 1½ hours due to a track signal fault that morning.

On May 19, SMRT said a signal fault caused trains to move slower in both directions across the entire TEL, resulting in an additional 10 minutes of waiting time for commuters.

The TEL was opened in stages, with the first stage between Woodlands North and Woodlands South stations opening in January 2020 and the second stage - comprising six stations between Springleaf and Caldecott - opening for passenger service in August last year.

TEL Stage 3, which will comprise 11 stations between Stevens and Gardens by the Bay, is set to open later this year.

In preparation for this, SMRT and the Land Transport Authority have been testing the integrated systems and trains for TEL Stages 1 to 3 since early this year.

Between Feb 26 and May 29, train services on the TEL started later on weekends to carve out additional engineering hours for testing.