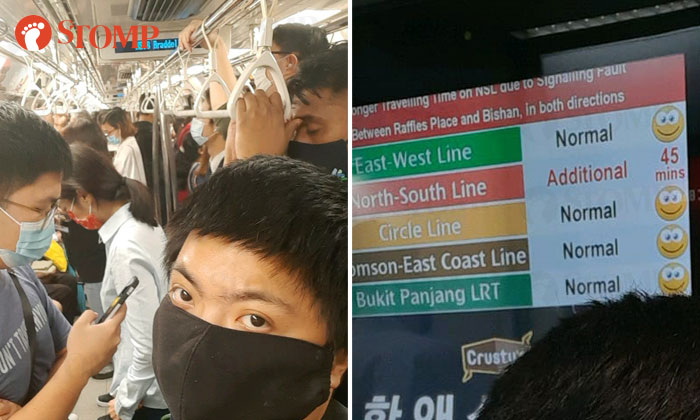 Commuters were delayed after a signalling fault occurred along the North-South Line on Monday morning (Mar 29).

Stompers affected by the delay alerted Stomp to the incident.

Stomper Wei Sien told Stomp he boarded a train at Braddell MRT Station at about 8.07am.

"I took the train from Braddell station and reached Orchard station at 8.40am," he said.

"I reached work at Takashimaya at 9am."

Another Stomper was frustrated by the breakdown.

"There was an issue with the train heading from Ang Mo Kio to Marina South Pier," he said.

"I was stuck in the tunnel between Braddell and Toa Payoh.

"This is not the first time and it is wasting our time waiting inside.

"There should be a penalty and the management should account for it."

SMRT posted a tweet at 5.47am that commuters should add 25 minutes of train travel time between Raffles Place and Toa Payoh stations.

[NSL]: Due to a signalling fault, pls add 25mins train travel time btwn #RafflesPlace and #ToaPayoh. Free bus and free bridging bus services are available between MarinaSouthPier and ToaPayoh.

At 6.40am, it advised passengers to avoid taking trains between Bishan and Marina South Pier stations.

At 7.30am, SMRT said to add 45 minutes train travel time between Raffles Place and Bishan Stations. It added: "We are sorry for affecting your morning commute."

[NSL] UPDATE: Due to a signalling fault, please add 45mins train travel time btwn #RafflesPlace and #Bishan. Free regular bus and bridging bus services are available. We are sorry for affecting your morning commute.

In subsequent tweets, commuters heading to the city were advised to take other lines.

At 10am, the signalling system was reset and train services between Toa Payoh and Marina South Pier stations were down for approximately 15 minutes.

At 10.46am, SMRT said train services had resumed.

[NSL] UPDATE: Train services have resumed. Free regular bus and bridging bus services have ceased. We apologise to commuters who were inconvenienced with longer journeys.