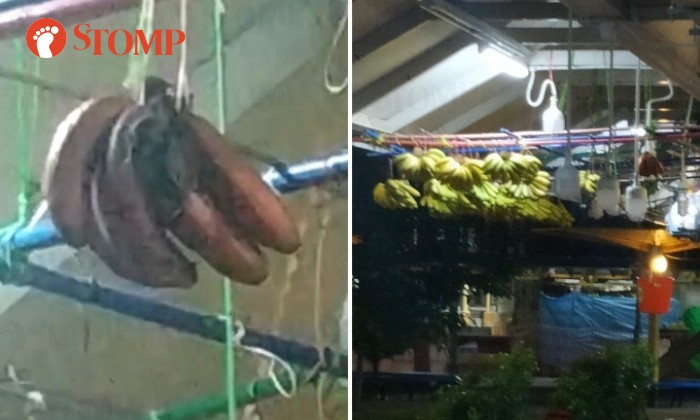 The Singapore Food Agency (SFA) has responded to a resident's concerns after seeing bats eating bananas that were left hanging outside a fruit stall at Block 531 Ang Mo Kio Avenue 10.

A Stomper shared videos and photos with Stomp on July 23 after he had seen the bats eating the bananas that night at around 10pm.

"I have seen bats flying around the corridor a few times at night, especially after 10pm," the Stomper said.

"I do not feel safe to walk along these corridors at night with all these bats flying around."

In response to a Stomp query, SFA said: "Under the Environmental Public Health (Food Hygiene) Regulations, operators of food retail premises are to ensure that food are protected from likely contamination by placing such food in covered receptacles or other effectual means.

"SFA conducts routine inspections as well as inspections upon receiving public feedback of food retail establishments to ensure compliance with our regulations, and will not hesitate to take enforcement action if necessary."

SFA also added that food safety is a joint responsibility.

"While SFA puts in place and enforces the regulatory measures, food operators must play their part by adhering to good food hygiene and preparation practices," a spokesman for SFA said in a statement.

"The reader did not lodge a feedback with SFA.

"SFA will not hesitate to take enforcement action against errant food handlers if we have obtained sufficient evidence," they added.

The Stomper told Stomp in an update on Tuesday (August 4) that the bananas are no longer outside.