Bat gets wing stuck in flowerbed grille at Pasir Ris, freed by rescuers 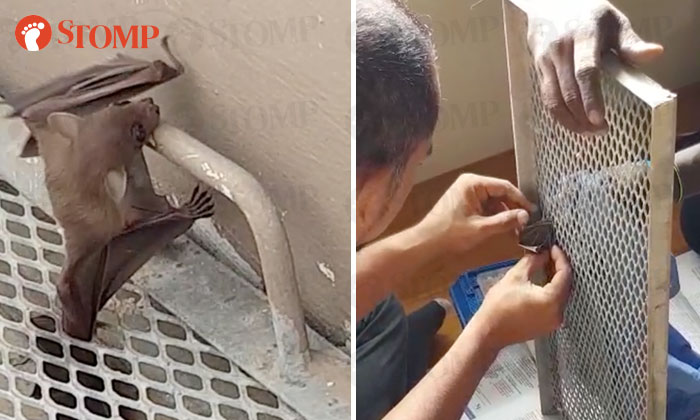 Stomper Pat and his daughter found a strange visitor in their home yesterday morning (June 28).

Pat who stays at Block 160 Pasir Ris Street 13, told Stomp that his daughter first heard screeching from the balcony at about 7.30am.

She then told Pat about it and the two went to investigate the source. They realised that a bat had been stuck on the flowerbed grille outside their balcony.

In a video taken by Pat, the bat is seen biting and clawing as it desperately attempts to free itself from the grille.

The animal was clearly in distress.

Two officers were dispatched and reached Pat’s home at about 8.30am. The officers removed the grille and brought it into Pat’s flat.

Pat also took a video of the process as officers attempt to free the bat.

In the video, an officer places a piece of cloth over the bat as his colleague locates its caught limb, carefully freeing it.

The officers then place the critter into a small plastic container.

“The process took about an hour. We were all worried that the bat was hurt.

"From what I know, bats are nocturnal so the poor creature could have been stuck since 3am or 4am.

“They told us that the bat had a tear in one of its wings but it would be alright.”

Pat later messaged the officers and was told that the bat would be taken to the zoo.

“I think they are probably bringing it to the zoo so the vets can take a look at it.

“The whole process was very interesting and I think the officers did a very good job.

“They were so gentle with the small bat.”