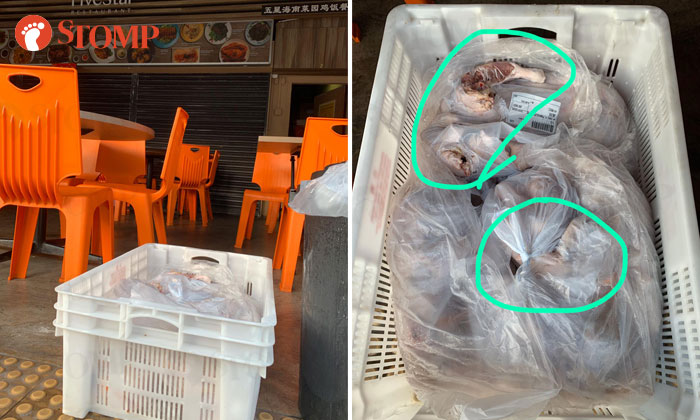 The Singapore Food Agency (SFA) is investigating a case where a basket of raw chicken was left out in the open outside a restaurant in Bukit Timah on Jan 24.

Stomper Angela shared with Stomp photos she took of the uncooked meat that was outside Five Star Chicken Rice restaurant at Cheong Chin Nam Road at about 7.40am last Friday.

In the photos, plastic bags filled with chicken meat are seen inside a white basket. However, one of the bags is torn, exposing some pieces of meat.

"I saw one large basket of unchilled and uncooked chicken meat exposed next to a black bin," said Angela.

She speculated whether the meat was to be disposed of but noted that a sticker on one of the plastic bags showed that day's date (Jan 24).

"I think with the Wuhan virus situation right now, the food and beverage industry should be more vigilant."

In response to a Stomp query, an SFA spokesman said: "SFA is investigating the matter."