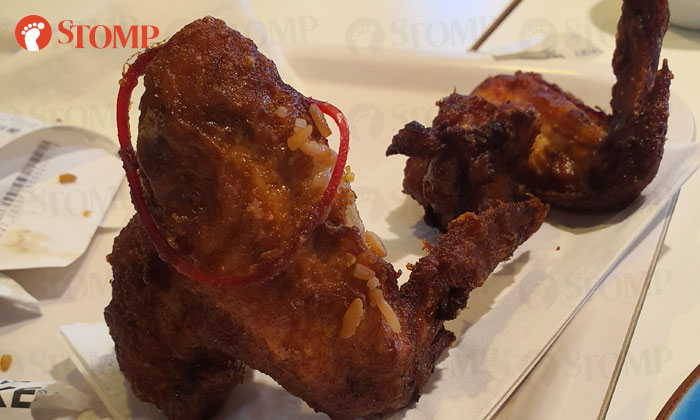 Swedish retailer IKEA told Stomp it has apologised to one of its customers who reportedly found a rubber band on his fried chicken at its in-store restaurant at Tampines on Monday evening (Jan 20).

Stomper Danial told Stomp he had bought the fried rice set that came with two fried chicken wings from the Halal counter in the restaurant at about 5.30pm.

"I noticed a rubber band had been fried together with one of the chicken wings," he said.

"I was surprised that such a lapse could happen there."

He told Stomp he put the rubber band to one side and finished his meal before reporting it to the restaurant's staff.

He showed one of the staff members photos he had taken of the rubber band with his phone.

He said when he returned to his table to show the staffer the rubber band, his tray had already been cleared away.

"The staffer apologised to me regarding the rubber band," he said.

"I hope by sharing this incident, IKEA can be more aware and re-look their procedures."

In response to a Stomp query, IKEA Tampines store manager Denis Hautcourt said: "It is with deep concern that our IKEA food team heard from a customer who reported finding a rubber band in a chicken dish on Monday evening.

"We immediately offered to replace the meal and provide a full refund.

"We are really sorry our customer had this experience and our kitchen production manager reached him by phone to offer a personal apology and welcome him back to IKEA for a meal.

"We have conducted an internal investigation however our customer declined to hand over the object and we have been unable to identify where it might have come from.

"We do not allow rubber bands of any kind in our food preparation areas.

"Chicken wings are not stored or packed using rubber bands.

"Our kitchen team checked stocks of cooked and uncooked chicken wings but found no sign of contamination or improper storage.

"Our food safety standards exceed regulatory requirements and our kitchens are inspected three times a year so people can count on IKEA for affordable, safe quality meals."