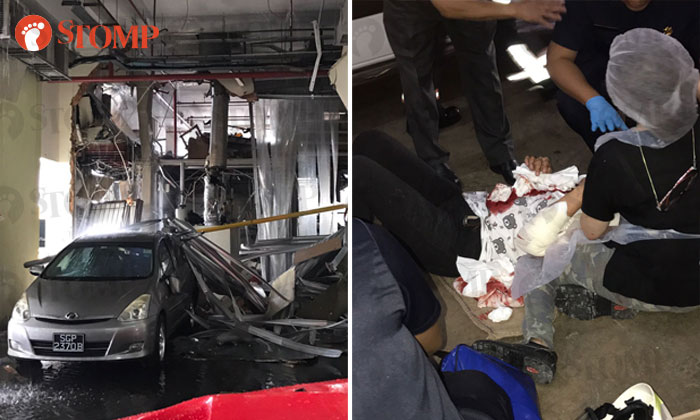 The Singapore Civil Defence Force (SCDF) said that five workers were injured in the incident that took place at Enterprise Centre today (Sep 11) at around 11am.

They also added that there was 'significant damage' to the building's premises following what happened.

"There was no fire upon SCDF arrival. The industrial incident resulted in the partial collapse of a wall and significant damage within the premises.

"No one was trapped in the incident.

"Five injured workers were conveyed to hospitals by SCDF ambulances.

Several people were injured in an incident at Enterprise Centre located at 20 Bukit Batok Crescent today (Sep 11) at around 11am.

Stomper Judy, who was working in the building, reported hearing a loud sound, and went to investigate.

She told Stomp in a telephone interview:

"I heard an explosion from a neighbouring unit. It was very loud."

Parts of a ceiling and a wall were severely damaged in the incident.

In a photo the Stomper sent, debris can be seen strewn all over a stationary car.

Judy added that around two to three people were injured but were conscious.

When she was at the scene, paramedics had arrived and were attending to the victims.

The Stomper, as well as other onlookers, were then told to evacuate the area.

"SCDF responded to an industrial incident at 20 Bukit Batok Crescent at about 11am. SCDF is currently at scene."

Another Stomper, Raymond, told Stomp that he had intended to drive into the road outside Enterprise Centre at around 11.50am, but discovered that it had been blocked by police.

He reported seeing police cars and fire engines in the vicinity of the building.

While having lunch at a nearby eatery, Raymond said he heard passersby saying that there was an explosion at the industrial area.