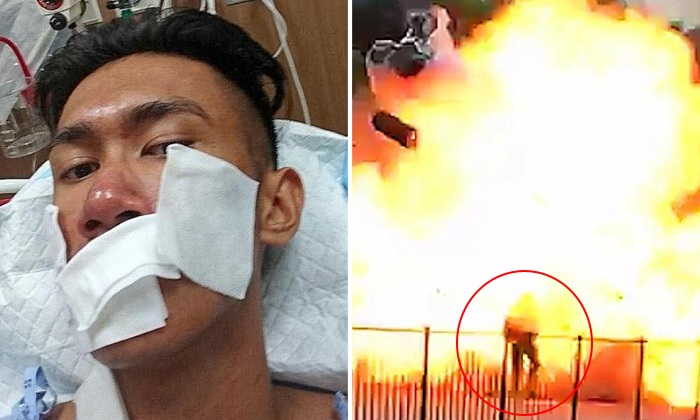 A Singapore Civil Defence Force (SCDF) firefighter, who was injured after a taxi exploded at Commonwealth Avenue on Apr 30, is on the road to recovery.

The full-time national serviceman, Eka Putra, is among the four who were hurt in the incident, which occurred near Buona Vista MRT station at around 2.15pm.

They sustained minor injuries and were sent to the National University Hospital (NUH).

The Trans-Cab taxi had been involved in an accident with a car before it caught fire.

In an earlier report, several Stompers contributed photos of smoke in the area, the charred vehicle with its rear missing, as well as SCDF personnel at the scene.

Some also sent in videos showing how Mr Putra, who had a compressed air foam backpack to extinguish the blaze, and his colleagues had approached the burning taxi.

Netizens reacted in horror to the clips, with many asking about him and expressing their well-wishes. According to The New Paper, some even thought that Mr Putra, who is from Clementi Fire Station, had died.

But miraculously, he walked away from the scene and was conveyed to NUH.

Mr Putra, who suffered first degree burns on his face and neck, was discharged hours later. He was also given seven days of medical leave.

After the incident, the avid motorcyclist tweeted in Malay: "Thank you God cause u protected me."

He also called his station mates his second family and uploaded several pictures of them onto his Facebook page.

On Monday (May 1), Prime Minister Lee Hsien Loong called Mr Putra and his colleague brave for running towards danger to save lives and help others.

"Good to learn that the firefighter caught in the blast is ok. He only suffered minor burns, and has been discharged. Hope he and the others injured recover soon. The Home Team works hard to protect Singapore and Singaporeans," he added.