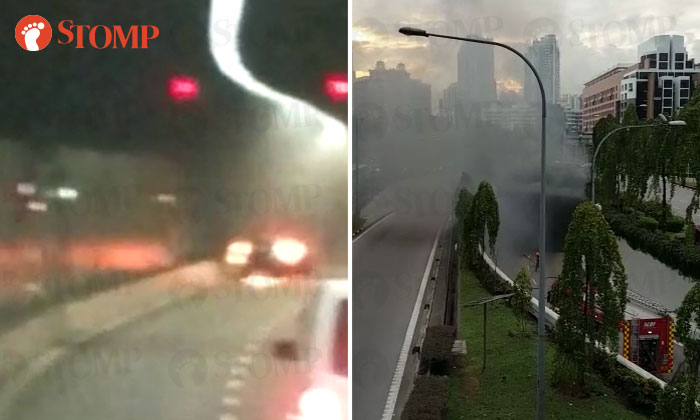 A car caught fire in the Central Expressway (CTE) tunnel towards Ayer Rajah Expressway (AYE) before the Havelock Road exit today (Aug 12) at around 6pm.

Stompers Andy, David and Anonymous were near the scene and sent Stomp photos and videos.

David said that two explosions could be heard from the overhead bridge near the Havelock Road exit.

The fire caused plumes of smoke to emit from the exit of the tunnel.

Another Stomper said that he saw the two occupants of the vehicle safely exit without being harmed and tried extinguishing the fire themselves.

In response to Stomp's media queries, a Singapore Civil Defence Force (SCDF) spokesman said that they received a call for assistance at the CTE tunnel towards AYE before Havelock Road exit at 6pm.

The fire, which involved an entire car, was extinguished by SCDF using one water jet.

There was no report of injuries