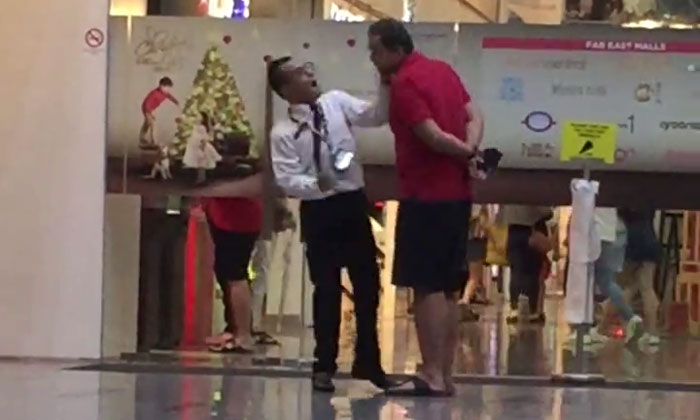 A Certis CISCO security guard has been fired after arguing with and slapping a man at The Central at Clarke Quay on Nov 25.

"Certis CISCO regrets to learn of the very unpleasant incident that happened at Clarke Quay Central on 25 Nov and would like to extend our apologies to the member of public.

"At Certis CISCO, we train and expect our staff to conduct themselves in a professional decorum and we have zero tolerance for misdemeanour that runs contrary to the code of conduct expected of our staff.

"As such, the staff involved in this incident has been terminated with immediate effect.

"We have also shared the incident with the rest of our security staff and reiterate the importance of conducting themselves professionally when interacting with members of the public."

Stomp also reached out to CBRE, the managing agent for The Central at Clarke Quay.

"CBRE takes a serious view of the safety of the occupants in all the buildings we manage.

"Following the incident, we carried out a thorough investigation with all parties concerned including the security company Certis Cisco who employed the security officer involved in the incident.

"We understand that Certis Cisco has since terminated the employment of the security officer.

"This is the first time an incident of such a nature has been lodged and we will work closely with Certis Cisco to ensure that the security personnel deployed at the mall carry out their duties with the highest level of professionalism."

A shopping mall security guard was seen on video slapping a man's face during an argument.

A video of the incident was posted on Facebook by user CJ Bartolome.

The incident happened at Clarke Quay Central on Nov 25.

In the video, the two men can be seen having a heated argument, although it is unclear what the dispute is about.

The guard points and gestures at the man wearing a red T-shirt.

He then slaps the man on the right side of his face, taking him off guard.

The guard then backs away while the other man regains his balance before furiously storming back into the mall.