Vulgar fight outside Orchard Towers: Man challenges 2 others to "touch me!" 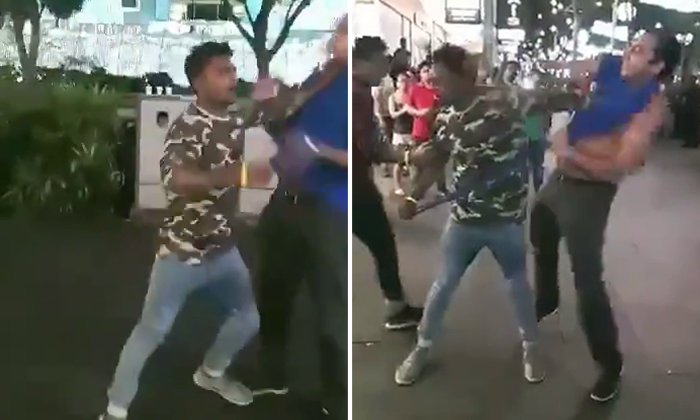 A fight that broke out among three men outside Orchard Towers saw them hurling vulgarities and exchanging blows with one another.

It is unclear when exactly the incident occurred, but Stomper Ayu alerted Stomp to a video that was posted on Facebook.

In the video, a man in a camo-print shirt can be heard repeatedly telling two other guys: "I am from India!" and challenging them to "touch me!"

He also stated his name and shoved both guys during his tirade.

Him shoving the second guy (in a blue shirt) in the neck led the latter to retaliate and the dispute to turn violent.

The fight mainly involved these two men, though the third guy can be seen throwing in a punch as well.

The altercation was only broken up by a fourth guy clad in white, who separated both parties and then tried talking calmly to the guy in the camo-print shirt.

We think things could have gone very differently if the guy had used a different tone when saying "touch me":

Oh, and the guy in blue is going to need a new shirt.

Related Stories
Man throws opponent to the ground with 'judo' move during fight outside Golden Mile Complex
Men fight outside bar in Clarke Quay while 2 others try to separate them
Women and men throw punches and kick each other in open field at Kallang
More About:
fight
dispute