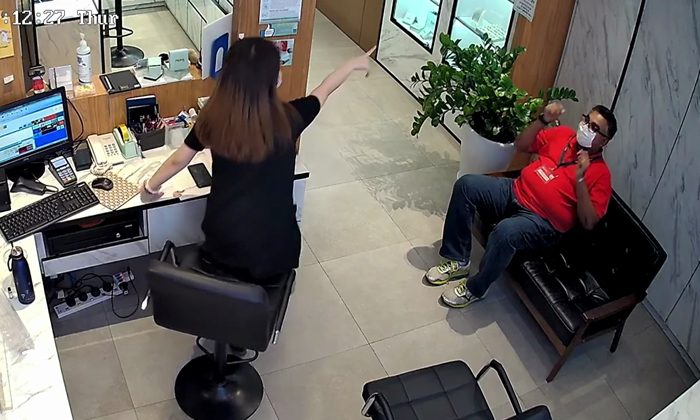 A Safe Distancing Ambassador (SDA) who solicited favours from staff at a shopping mall in exchange for preferential treatment has been removed from service.

The incident came to light after CCTV footage of the SDA's interaction with an employee at a shop in Century Square was posted on Facebook last week.

A post accompanying the video alleged that the SDA came "every other day to disturb the staff" and "terrorising to take photos and write reports if they breach any measures."

The post added: "When staff requested for him to scan SafeEntry before entering the store, he always simply replied he's not required [to do so] because he's an SDA."

In the video dated July 30 according to its timestamp, the SDA can be seen entering the store and sitting on a sofa.

He then removes a "Tiffany" bangle from his wrist and passes it to the employee. When she tries to return the bangle, he gestures at her to polish it, which she does.

The SDA can subsequently be heard telling the employee "I like you lah" and saying he would not write a report.

In response to Stomp queries, Enterprise Singapore (ESG) confirmed that the person in the video was a SDA whom it had deployed to carry out safe distancing duties at Century Square.

A spokesman: "ESG was alerted to the case on August 19 through a Facebook video that the owner provided and immediately conducted an investigation. The SDA was also suspended from his duties on the same day.

"Based on our preliminary investigation, the SDA was found to have behaved unprofessionally and misused his position to solicit favours from a store in the mall, in exchange for preferential treatment during surveillance checks.

"Following the notification of suspension, the SDA was removed from service on August 20.

"The SDA has also acknowledged the misconduct and apologised to the affected parties, including the staff and owner of the affected store."

The spokesman also said that ESG will continue investigations and assess if further actions will be taken on the matter.

"We are also in touch with the affected store and have extended our apologies to them for the inconvenience caused," added the spokesman.

"ESG takes a serious view of any misconduct and will not hesitate to take stern action against SDAs who are found to be in breach of these professional standards.

"We will continue to educate and remind all our deployed SDAs on the strict requirement to maintain their integrity and professionalism in all engagements with businesses and members of the public.

"We would like to thank the owner for alerting us to this incident so that swift action could be taken to address the situation."