31 warned over corruption at Mandai Crematorium 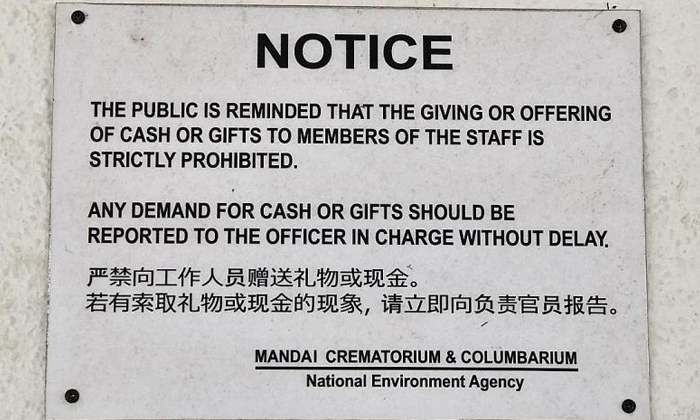 Seventeen workers at Mandai Crematorium and Columbarium were given stern warnings yesterday for receiving red packets from funeral service companies in return for preferential treatment.

Two senior NEA officers also faced disciplinary action for failing to report the workers despite knowing about the practice.

In its statement yesterday, the CPIB said the 17 workers were each given the warning for one count of corruptly accepting gratification in the form of red packets from funeral directors and hearse drivers "to smoothen the cremation process".

The CPIB said 12 employees from the funeral service companies were also given stern warnings for corruptly giving gratification to NEA staff.

Another two employees received stern warnings for abetment to corruptly give gratification to NEA staff.

The New Paper understands there was no evidence to suggest the workers had failed to perform their duties or showed disfavour to families who did not give red packets.

After careful deliberation by the authorities, it was decided that in lieu of prosecution, stern warnings would be issued to the 31 people involved.

The NEA alerted the CPIB last October after receiving a complaint that its workers at the crematorium were receiving red packets in return for preferential treatment.

Yesterday's CPIB statement came after The Straits Times published a letter on Monday asking for updates on the issue.

The bureau strongly advised the public not to give gifts or entertainment to public officers in return for favours, as such actions constitute an offence under the Prevention of Corruption Act.

"A gift given innocently and without any corrupt intention is not considered corruption," said the CPIB.

"However, if a gift is given or received with a view to secure, or to reciprocate with, for example an unfair advantage, it may be corruption."

Anyone convicted of corrupt transactions with agents can be jailed for up to five years, or fined up to $100,000, or both.