Scooter riders perform stunts and climb parapet at The Cenotaph, treating it like a "skate park" 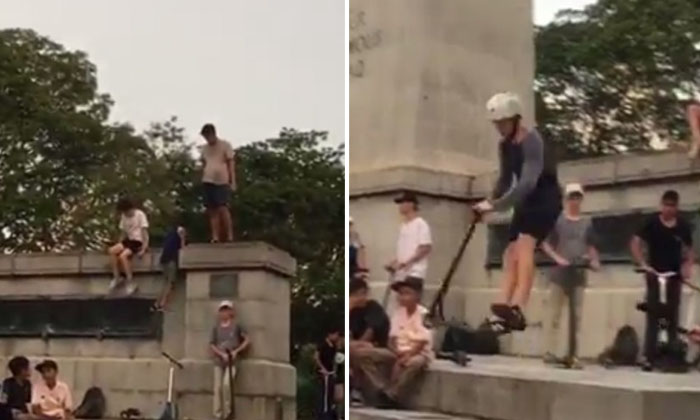 Youth riding on scooters were caught on video performing stunts and climbing onto a parapet at The Cenotaph in Esplanade Park.

The Cenotaph is a war memorial which commemorates the sacrifice of men who perished during World War I and II.

Stomper Mr Tan alerted Stomp to the video of the incident and said: "Wah, so happening here at a war memorial. Is it allowed?"

The video was originally posted by Facebook user Shaq A. Mohd on Nov 17 at 6.30pm and shared on Facebook page Singapore Incidents the following day.

The video starts with a scooter rider dashing in from the right side of the screen, whizzing over the steps of the monument.

A large group of youths is shown sitting on the steps.

Most of them have scooters with them too.

There are bags lying around the area and more scooter riders try dashing over the steps.

Some of the scooter riders are children, and a few of them can be seen scaling a parapet.

Many Facebook users reacted negatively to seeing the video and took to the comments section of the post to voice their unhappiness.

Facebook user Abdul Malik Mohammed Ghazali called the scooter riders out for treating a war memorial as if it was a skate park.

Facebook user Ng Ming Jie advised them to go to a skate park.

Facebook user Kian Wee Max felt that the war veterans who died for Singapore were being disrespected.