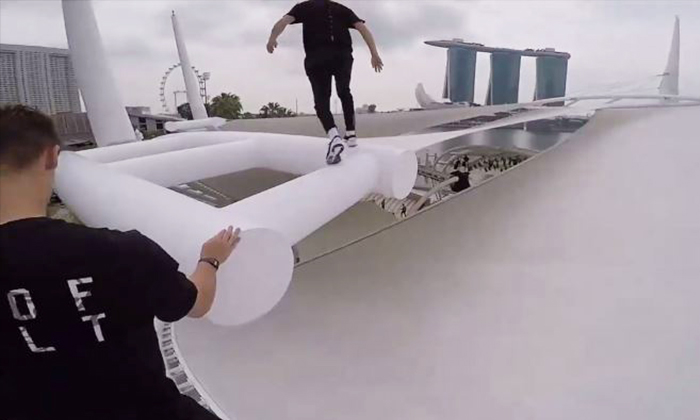 The Esplanade has lodged a police report following a video depicting several men performing dangerous stunts on top of its outdoor theatre.

In a video that was posted on Facebook on Nov 14, at least three men could be seen scaling the theatre.

They were seen jumping, sliding and balancing precariously on the beams of the outdoor theatre. At one point in the video, they jumped over a sizeable gap between two flyovers near the Esplanade which onlookers film them from below.

The three foreign parkour enthusiasts are part of Team Storror, a channel that has amassed over 660,000 subscribers on YouTube known for its members performing death-defying parkour stunts all over the world.

In response to queries from The Straits Times, the Esplanade's head of operational support services Ravi Sivialingam said:

"We are aware of this incident at the Esplanade Outdoor Theatre. We take such incidents very seriously and have made a police report."

"We are investigating the incident together with the police and are not able to comment further."

The police also confirmed with The Straits Times that a report was lodged and investigations are ongoing.

In a similar incident in September, a police report was lodged after a parkour enthusiast filmed and posted a video of himself and his friends scaling the glass roof of Eastpoint Mall.