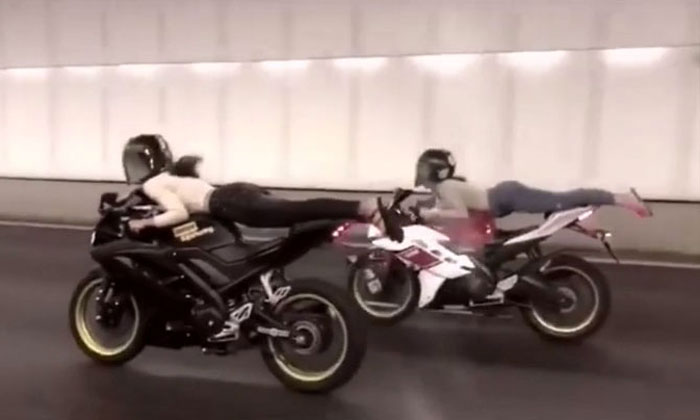 Two female motorcyclists were caught on video performing a stunt on their sports bikes in a tunnel.

Stomper El alerted Stomp to the video that was posted on Instagram Stories.

As stories expire after 24 hours, the video is no longer available.

It is also unclear where or when this happened.

In the video, the two women are seen riding "Superman-style" on their bikes where they lift their legs off the foot-rests to lie belly down on their motorcycles and extend their legs straight out behind to give off the illusion that they are "flying".

In one of the captions on the video, the Instagram user says in Malay that she is just trying the stunt out and asked her followers not to condemn her.

In the caption below that, she wrote, "masih pishang gareng nih" which is slang for a young person who is learning the ropes.

"I happened to come across a short Instagram video of two female motorcyclists 'flying' in Singapore.

"They're risking harm to themselves and to other motorcyclists."

Related Stories
Motorcyclist does Superman stunt on BKE then brags about it in WhatsApp group chat
Biker assisting with police investigations after performing 'smoky ring stunt' around groom at wedding
Police report made after men perform dangerous stunts on top of Esplanade Outdoor Theatre
More About:
stunt
motorcyclists
dangerous
motorcycle