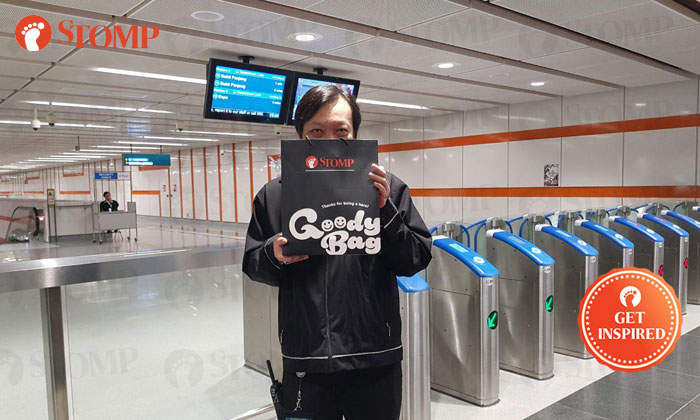 When Lawrence Goh, 47, found out he had been Stomped for topping up a woman's EZ-Link card after she found herself stranded without her wallet at Upper Changi MRT Station, he was shocked.

The naturally shy SBS Transit staffer is not used to being in the spotlight and was surprised at how the story had resonated with so many people online.

On Mar 1, Stomper Rachel was touched when Laurence offered to top up $10 into her card without hesitation after she told him she only had $7 in cash which could not even get her home to take her wallet.

Rachel promptly returned to the station as soon as she could to pay Laurence back and to give him a Toblerone chocolate bar and a handwritten note.

For Laurence, there was no doubt that Rachel would return.

"I just believed that she would come back," he said.

He told Stomp in an interview that he was uncomfortable that he had been singled out for his kind deed.

"I'm not used to this kind of attention, I'm very low profile.

"It's not just me, but all of my colleagues would help anyone in need."

However, he said that he still felt very grateful and appreciative of the positivity that has come his way since the original article was published on Stomp.

"My colleagues and I have often helped people in similar situations at the station, usually they are the elderly," he said.

"I once bought a ticket from here to Tampines for a woman who works as a cleaner at Singapore University of Technology and Design (SUTD).

"She came back and insisted I take back the money and returned a few weeks later with treats that I shared with my colleagues.

"When my wife saw the article in Stomp she said, 'Finally someone recognises you'.

"But that's beyond the point."

Laurence likes how his story has rubbed off on other people and the idea that people appreciate even the smallest gesture.

"If everyone does one little thing a day for someone else, it will make our society a better place," he said.

"I believe that this is something all of us can do."

Stomp presented Laurence with a Stomp Goody Bag as part of our efforts to recognise everyday heroes and highlight heartwarming deeds.

Related Stories
Woman stranded after forgetting wallet -- so SBS Transit employee adds $10 to her card from his own pocket
Driver who alighted car in traffic to help injured pedestrian awarded Stomp Goody Bag
Why SBS bus captain helped injured uncle at bus interchange when no one else would
More About:
inspiring
kudos
Stomp Goody Bag
SBS Transit