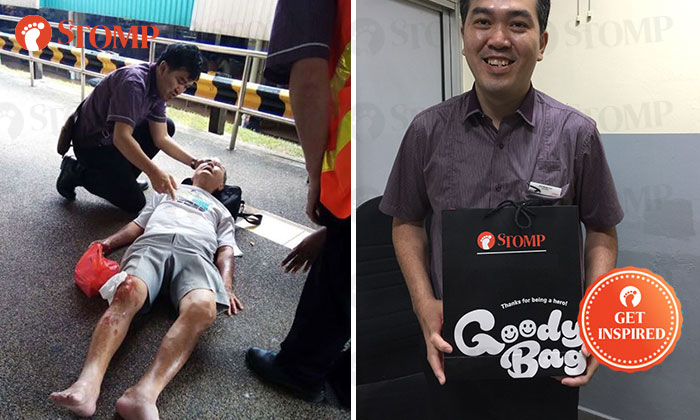 Sometimes, it takes just a little time and effort to help someone in need.

On Feb 21, Mr Siat came across a bloodied elderly man lying on the ground at the Harbourfront Bus Interchange.

Mr Siat who was duty then, did not simply rush off for his shift.

He immediately stopped to render assistance to the uncle.

According to Mr Siat, the uncle was bleeding profusely from his right leg and forehead.

Composing himself, Mr Sia called his supervisor who dialled for an ambulance.

He asked the uncle if he wished to inform his family about the situation, but the man told him that an ambulance itself was sufficient.

As they waited for the ambulance, the elderly man told Mr Siat that he had fallen down, and although there had been many passersby, not one stopped to help him.

Noticing the elderly man’s discomfort, Mr Siat took out pieces of tissue paper to wipe away the blood on the uncle’s leg and head.

Next, he placed his bag on the ground so the uncle could lie on it, and took off the uncle’s shoes.

As it was scorching hot in the afternoon sun, Mr Siat folded pieces of paper and fanned the uncle as they waited.

Only after paramedics arrived and carried the uncle onto the ambulance did Mr Siat finally leave for his duty.

The uncle was tremendously grateful and thanked Mr Siat repeatedly for his help.

Asked why he had gone, quite literally out of his way, to help the man, Mr Siat replied:

“I feel that the society needs more care and concern, especially for elderly folks and children who need help. It is only through our actions can the society be made a better place.

“So you don’t have to be afraid (of little inconveniences). If you see anyone who needs help, just reach out and try your best to help.”