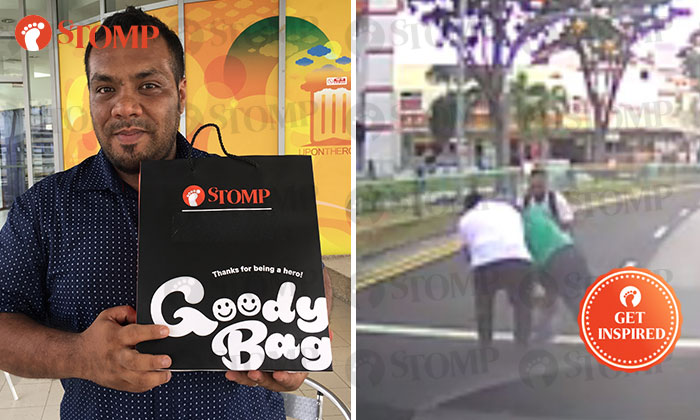 Most people would help someone in need if given the chance, but would you do that when you’re pressed for time?

Stomper Hamad G, an Uber and limousine driver, was presented with such a situation on Feb 28.

He has stopped at a traffic junction along Bedok Reservoir Road when an elderly pedestrian suddenly fell headfirst onto the road.

At the time of the incident, Hamad’s car was the first in a line of vehicles, and the light was going to turn green any second.

Furthermore, he was in a rush to meet a client.

Nevertheless, Hamad immediately switched on his hazard lights and alighted to help the pedestrian.

Said Hamad: "I could see that it was not just a simple fall. I suspected that the uncle had some sort of stroke or a condition. His hands were by his side as he fell.

"Normally, you would definitely use your hands to soften the impact of the fall, but I think he lost consciousness for a while, so he couldn’t react in time."

The pedestrian was bleeding profusely from his head and could not pick himself up despite a passer-by rushing to his assistance.

Hamad and the passer-by managed to help the uncle up, and carry him to the side of the road.

Hamad then called for an ambulance and explained to the passer-by that he was running late for a client meeting.

The passer-by agreed to stay with the uncle until the ambulance arrives.

Hamad G quickly rushed back to his vehicle and drove off to meet his client.

When Hamad later made a turn back to the junction, both the passer-by and uncle were nowhere to be found.

He later received a call from an ambulance staffer informing that the uncle could not be found.

Asked why he had taken the time to help despite being in a hurry himself, Hamad proudly professed that it was his motto to go the extra mile to help others in need, a mantra ingrained in him by his father.

The father of two also hopes his children take after him in this aspect, adding: "Never be afraid to help others in need.

"I hope both my children  — four-year-old daughter, Hyfa Sheiqha, and two-year-old son, Sayf Hydr — will also be like me, and pick up this ‘habit’ of going the extra mile, much like how my dad, Mr Fauzi taught me."

Watch Hamad’s interview with Stomp below.