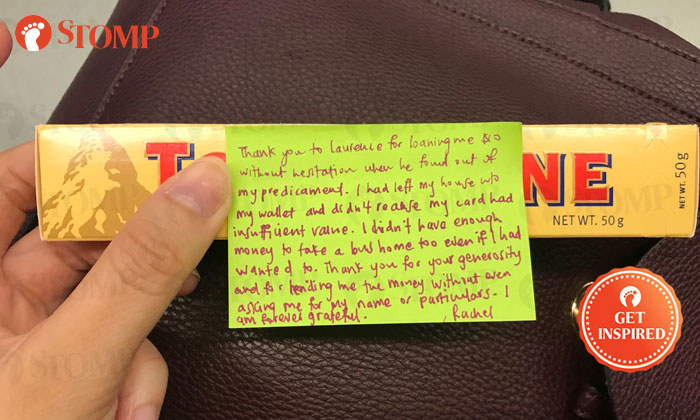 Stomper Rachel was touched when an SBS Transit staffer went beyond the call of duty to help her out when she found herself stranded at Upper Changi MRT station without sufficient funds to top up her card yesterday (Mar 1).

She realised she had left her wallet at home and had only $2 left in her EZ-Link card.

"I live 20 minutes away from the station and would not have been able to take a bus back home even if I had wanted to and would probably have to take a cab home and to town, where I had to be," she said.

She approached Mr Laurence and asked if it was possible to top her card up with $5.

"I explained that all I had on hand from rummaging through my bag was $7," she said.

"Without even hesitating he waved his hand and said don't worry, I'll pay for you.

"He went ahead to top up $10 into my card for me without even asking for my name or particulars.

"I was so touched because everyone was whizzing past me with their headphones on or heads buried in their phones and I don't know who else would've lent me the $3 more that I needed."

Rachel told Stomp that she returned to the station while Mr Laurence was still there to repay him for his kindness.

"It is because of kind people like Mr Laurence that everyday life is brighter," she said.