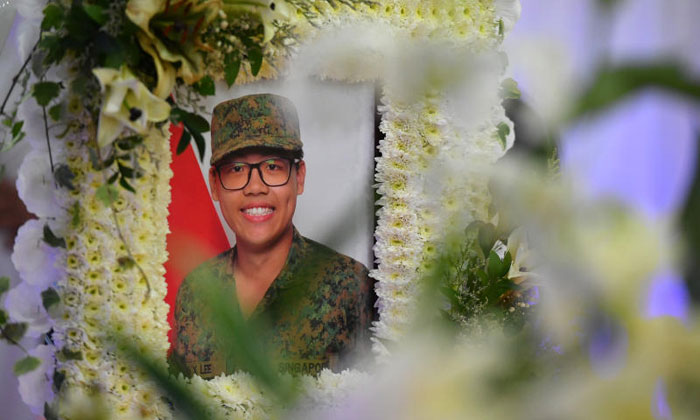 A Singapore Armed Forces (SAF) officer will be charged in court on Wednesday (Oct 31) in relation to the death of full-time national serviceman Corporal First Class (CFC) Dave Lee.

The police said six other other SAF servicemen who were involved in the incident have been referred to the Ministry of Defence (Mindef) for investigations.

If convicted, Capt Tan could be jailed for up to five years, or fined, or both.

Details of Capt Tan's designation and his involvement in the case were not revealed.

CFC Lee from the 1st Battalion Singapore Guards suffered a heatstroke after completing an 8km fast march in Bedok Camp on April 18.

The 19-year-old died on April 30, two weeks after he was admitted to Changi General Hospital.

A Committee of Inquiry (COI) was convened by the Armed Forces Council on May 2 to investigate the circumstances leading to the incident, while the police also conducted independent investigations.

It said that of the six, two of them are regular servicemen, and four are national servicemen.

If Mindef's internal investigations find that these six servicemen have committed military offences, they will be liable for punishments under the SAF Act.

Punishments could range from a fine to detention and/or reduction in rank as well as administrative penalties.

Mindef said: "SAF personnel who conduct unauthorised activities, or who wilfully or negligently fail to comply with training safety regulations, will be severely dealt with and prosecuted under military law by way of Summary Trial or General Court Martial, or under criminal law before the civil courts."