SCDF NSF who drowned was pushed into pump well despite "looking worried", 1st of 5 officers jailed 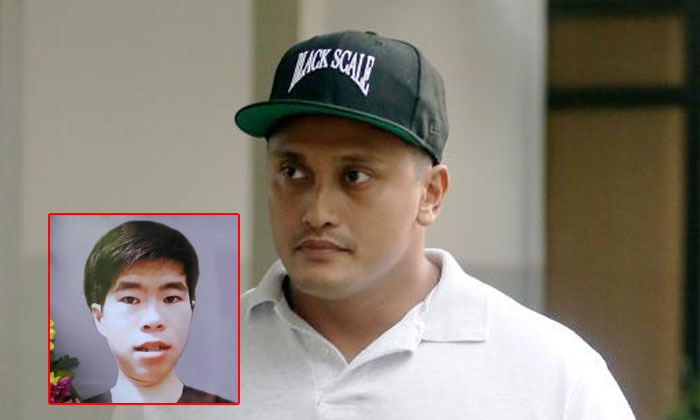 For 12 seconds at about 9.06pm on May 13, Corporal Kok Yuen Chin stood at the edge of the fire station pump well, looking worried.

Around him, fellow Singapore Civil Defence Force (SCDF) officers were cheering and egging him on to enter the 12m-deep well filled with water.

Cpl Kok hesitated and someone told him to sit at the pump well's edge.

He complied but made no attempt to enter.

A sudden, forceful push came from behind, and Cpl Kok fell into the well.

He did not resurface.

Eight seconds later, some of the SCDF officers jumped into the well in an attempt to save him, but to no avail.

It took another 36 minutes before Cpl Kok's body was recovered from the well, after water had to be pumped out.

A harrowing account of the incident on May 13 night emerged in court papers on Tuesday (Oct 23) as SCDF regular Muhammad Nur Fatwa Mahmood, 34, admitted to the fatal push that resulted in Cpl Kok drowning.

Nur Fatwa was sentenced to 12 months and four weeks' jail for causing death by rash act in the May 13 incident at Tuas View Fire Station.

He also admitted to abetting the obstruction of justice when he told another officer to delete a video recording of the incident.

Four other SCDF officers have been charged in relation to the case.

The night of May 13 had begun in festivity and cheer.

A group of at least 13 officers - including the accused and those charged - gathered in a room at the fire station to celebrate Cpl Kok's impending operationally ready date (ORD) on May 16.

A plaque and cake were presented to Cpl Kok during the celebration. Nur Fatwa then suggested that Cpl Kok take part in the ragging ritual that would involve the NSF entering the pump well - this was referred to as "kolam".

Cpl Kok waved his hands to signal that he did not want to participate.

But Nur Fatwa lifted him by the armpits and along with two others carried Cpl Kok towards the pump well.

Nur Fatwa did not know Cpl Kok could not swim.

Encik is a term used to refer to SCDF regular specialists.

Court papers showed that the group did this despite anti-ragging posters displayed around the station.

Nur Fatwa was also aware that the kolam ritual was prohibited.

The bigger concern among some officers was that no one should be taking photographs or videos of the incident. Court papers showed that two of them had instructed the rest not to do so.

But the incident was captured on CCTV cameras.

Paramedics tried to resuscitate Cpl Kok, who was recovered from the well at about 9.43pm. He was taken to hospital and pronounced dead at 11.02pm

In the wake of the tragedy, the SCDF said it would install metal gratings over the openings of the wells to prevent unauthorised access.

In September, it said it would decommission pump wells at fire stations and beef up initiatives to eradicate ragging among its ranks.

He said his client was sincerely remorseful for causing the loss of Cpl Kok's life.

He added that his client and Cpl Kok were friends, and the latter was well-liked hence the celebration and the ritual.

Nur Fatwa himself had also been subject to the kolam ritual.

Mr Sunil told the court that Cpl Kok's participation in the kolam ritual had been discussed before and that it was "everyone's contemplation that it would happen".

"This is a man who regrets his actions completely and has come forth, at the earliest opportunity, to accept responsibility for his actions. Please give him one chance," said Mr Sunil in mitigation.

The prosecution, however, asked for a sentence of at least 14 months' jail to reflect the seriousness of Nur Fatwa's offences and severe public disapproval of such actions.

DPP Kumaresan said the accused's actions played a "central role" in putting a "premature and tragic end to a young man's life".

He said: "Unfortunately, (Cpl Kok's) life was extinguished for a pointless prank, executed for the satisfaction of others."