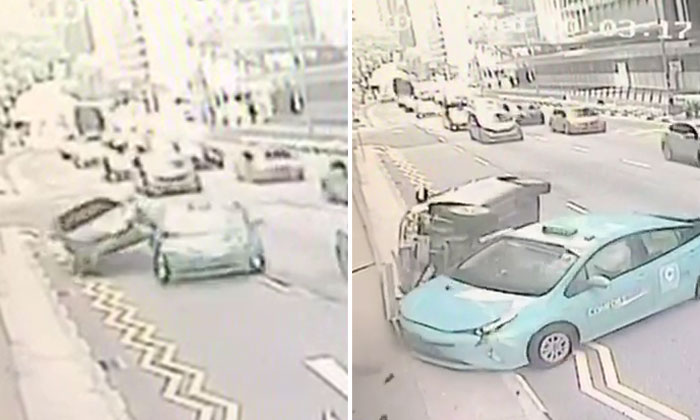 Video footage has emerged showing how an accident between a taxi and car occurred along Robinson Road on Wednesday (Nov 6), causing the car to turn onto its side.

Several Stompers alerted Stomp to the video that is circulating online.

Stomp earlier reported that the 62-year-old taxi driver was taken to Singapore General Hospital after the accident.

A man was seen climbing out of the car as security officers stood by with a ladder. 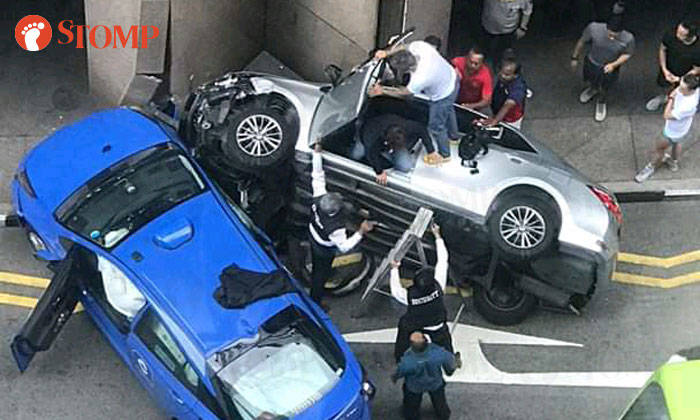 In the video, that appears to have been taken from a surveillance camera, the cabby is seen suddenly changing lanes from the second to the first lane, cutting in front of the silver car.

The car does not slow down as the taxi changes lanes, causing it to hit the side of the taxi and overturn.

The two vehicles come to a stop after they hit the side of a building. Tiles are seen breaking upon impact and flying off in multiple directions.

In response to a Stomp query on Wednesday, Ms Tammy Tan, Group Chief Corporate Communications Officer of ComfortDelGro said: "We are in touch with the passenger of the third party vehicle and our cabby.

"We are relieved that there was no passenger onboard our taxi at the time of the incident.

"We are currently investigating the incident and will also assist the police in their investigation."