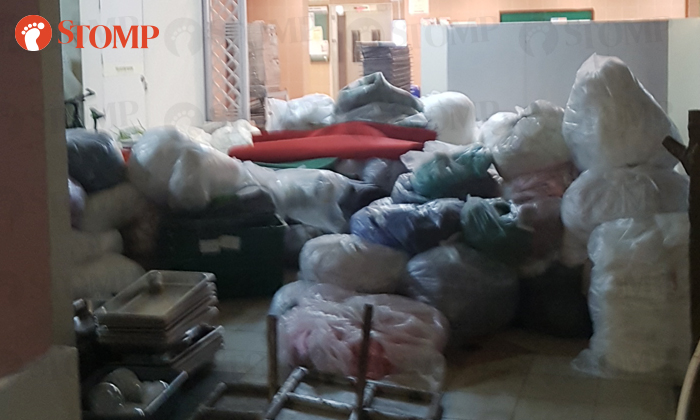 A resident who left a heap of clutter at the void deck of Block 863 Woodlands Street 83 has cleared the items after being advised by the town council.

Alvin told Stomp on March 18: "An inconsiderate caterer blocked the whole area with these stuff, which have been at the void deck for two days.

"It's very inconvenient, especially when it rains."

In response to a Stomp query, a spokesman for Sembawang Town Council said on Tuesday (March 23): "Our officer has advised the resident to remove the articles from the void deck. The items were cleared on the same day.

"We apologise for the inconvenience this incident has brought about to other residents."

Alvin also confirmed that the items have been removed.

Related Stories
Why common passageways in Tampines have been 'treated like storeroom for years'
Woodlands resident who cluttered corridor cooperative in clearing items away: Town council
Frustrated Jurong West resident says clutter at stairway 'has been there for years'
More About:
neighbour
messy
clutter
woodlands
town council