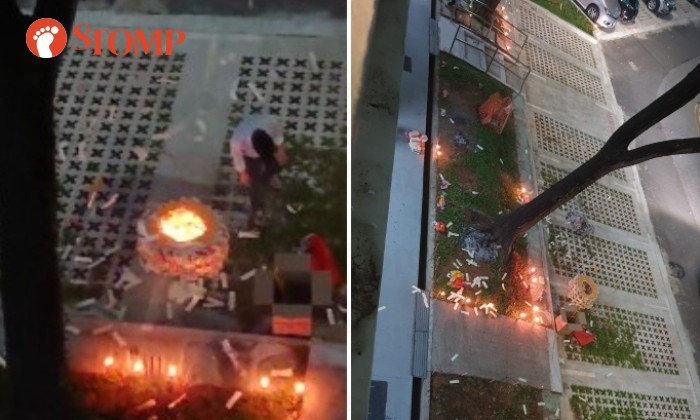 Ang Mo Kio Town Council has reminded residents to burn offerings in burner bins provided after some were caught burning offerings in a carpark at Block 613 Hougang Avenue 8 on August 29.

Stomper Jenny alerted Stomp about the incident and sent photos and a video of what happened.

In the video, a man can be seen burning offerings without using the designated bins provided by the town council.

"Since the first day of the Seventh Lunar Month, the carpark lots have not been spared from believers using it as a place to burn offerings," Jenny said.

"They should have used the burner bins provided, which can be found right outside the blocks where the carpark is located.

"A week later, the same group of people used the carpark lots to burn offerings again, which is upsetting as it means that about eight to ten lots cannot be used for parking.

"This makes me worried as there are tall tress around and sometimes, cars will be parked nearby as well." 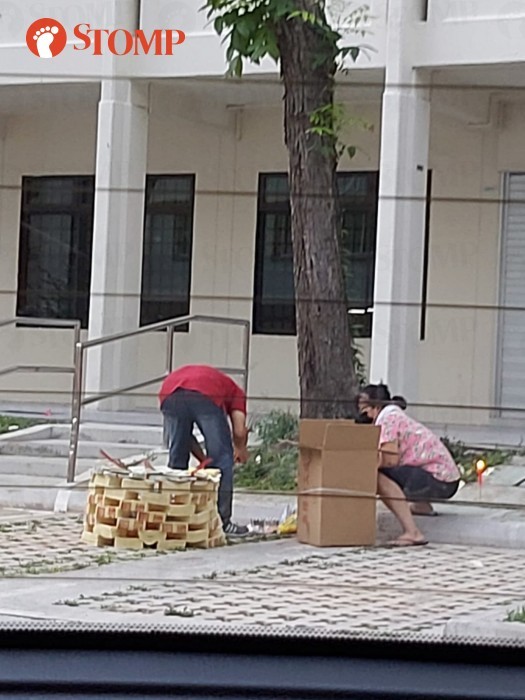 In response to a Stomp query, a spokesman for Ang Mo Kio Town Council said: "The town council is aware of the incident that happened on Saturday (29 August).

"The matter had been investigated, and we have spoken to the resident who burned the joss papers at the carpark lots of Block 613 Hougang Avenue 8.

"The resident had been advised to perform the joss papers burning prayers at the burner bin provided by the town council placed near the block.

"The affected carpark area had been cleaned of burnt ashes. We are monitoring the situation to ensure no further recurrence.

"To remind residents on responsible burning, a poster had been placed at the lift lobby of Block 613 Hougang Avenue 8 since the start of the Seventh Lunar Month."

In early September, Sembawang Town Council also had to remind residents to use the designated bins after some residents were seen burning offerings outside the bins.