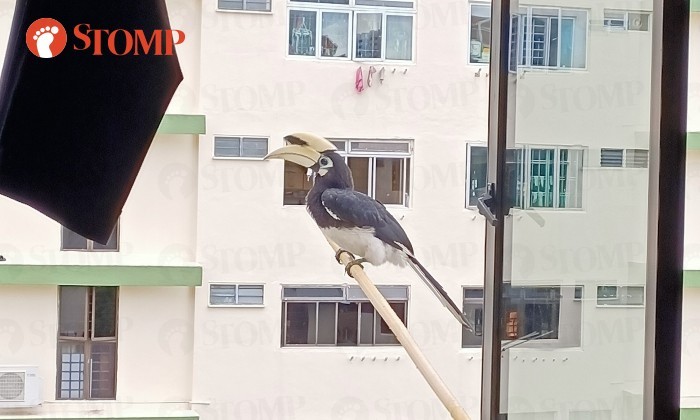 We have all seen birds land or perch themselves on our bamboo poles meant for laundry. And most of the time, they are birds we see on the daily.

But for Stomper Keng Ann, the bird that perched on his bamboo pole was a hornbill, a rare sight in the inhabited city areas of Singapore.

Keng Ann, who lives in Redhill, shared with Stomp that he encountered the bird on Friday (July 24) when he was walking to the kitchen to get some food.

He also caught his encounter with the hornbill on video.

"I was quite shocked initially, but I managed to snap a few pictures and a video of the bird," he added.

"I admired it for a good five minutes before it flew off.

"I found it quite amusing to be able to see and appreciate such a magnificent wildlife creature, especially since it stayed still like an exhibit while I took pictures," Keng Ann shared.

He also had a good laugh with his family about the incident, joking about "buying 4D after this" since it is so rare for such a unique bird to "fly to Redhill and land in front of their house".

"It feels unreal that the bird landed at such an impeccable timing for me to be able to capture it on camera," Keng Ann told Stomp.

Related Stories
Toa Payoh family gets surprise visit from crested goshawk that stares right into your soul
Auk-ward: Bird makes nest along Bukit Panjang corridor -- only for eggs to be stolen by crow
Hornbill visits Pasir Ris resident and gets treated with tangerines
More About:
bird
animals
nature