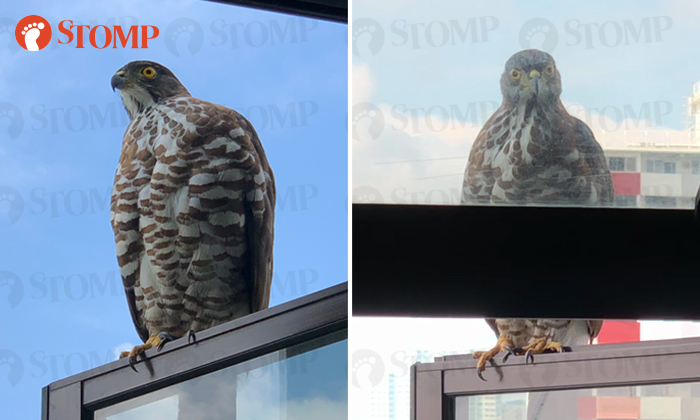 A crested goshawk chased away the Monday blues for Stomper Christopher and his wife after paying a surprise visit to their home in Toa Payoh.

Stomper Christopher spotted the majestic bird at his window on Monday (Apr 13), at around 10.25am, after hearing chirping sounds.

Christopher, who shared photos and videos of the encounter with Stomp, said: "Everyone was cooped up in the living room doing their own work until we heard a bird's chirping sound.

"At first, we kinda ignored it, thinking it might be just a domestic bird at one of our windows.

"However, when we heard the bird's second chirp, I realised it was very loud which indicated that it might be very 'close' to us.

"I decided to take a look, worried that the uninvited guest might have already flown into one of our rooms to 'wreck havoc'". Hence, I tip-toed and walked along the corridor to avoid unnecessary noise that might alarm the bird.

"I discreetly peeked into the room and what I saw next caught me by surprise — a majestic body was resting on the window frame with a pair of dashing eyes staring straight at me. It exerted the same petrifying powers of Medusa's glare.

"My brain went blank and I did not dare to move an inch. I was feeling threatened but at the same time excited to witness this moment for the first time.

"As the window was open without grilles and this 'beast' might just enter anytime to perform an attack, I stoned for at least 15 seconds and observed that it had no hostile intent before turning back to the living room to inform my wife about the 'eagle'.

"She did not believe what I saw and thought I might have mistaken it for other bird species. We tip-toed back the room and that was when she became excited too with what she saw."

The couple managed to take a few photos and videos of the dashing bird, which flew off after hearing their dog barking.

The crested goshawk is a bird of prey from tropical Asia.

It typically inhabits forests, wooded areas, parks and gardens, keeping to thick foliage from which it hunts.

According to online reports, there is increasing evidence of the crested goshawk adapting to life in urban areas.

View more photos of the bird in the gallery.