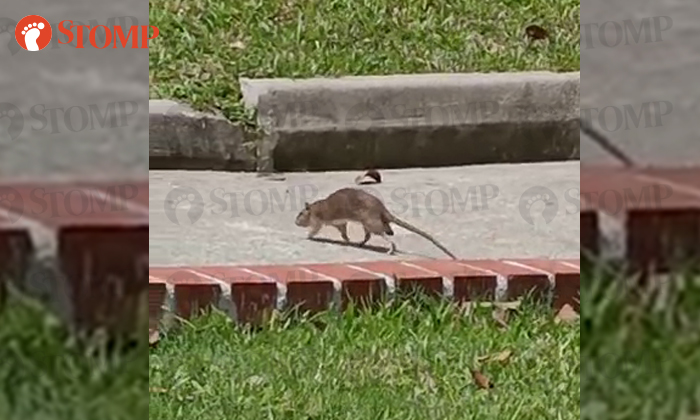 Stomper Gabriel was concerned to see a large rat roaming about in broad daylight in the vicinity of at Block 605 Bedok Reservoir Road recently.

He said that rodents have been a recurring issue in the estate since 2016, though they only appeared at night.

Gabriel told Stomp: "Rats can always be seen and heard running around, but all these only happened during night time.

"Even though pest control was said to have been called in, we never stopped seeing or hearing rats at night."

However, the Stomper grew even more concerned when he spotted a rat in the day for the first time on Mar 11, at around 12pm.

He added: "This is the the first time we saw a rat roaming around in the day. I did not appear to be sick or blind as you can see from the videos."

In response to a Stomp query, a spokesman for Aljunied-Hougang Town Council said: "The rodent situation in the Eunos ward is under control.

"The town council has a rat attack programme in place, which involves the treatment and systematic inspection of common areas for signs of rat activities, especially at probable food sources, bin centres and CRC areas every alternate day on weekdays."

Night inspections and rat culling are also carried out once a month, said the spokesman.

The spokesman added: "While the town council will play its part, residents are also constantly encouraged to play their part by tying up food waste in bags before disposing them, and not to leave food all around for strays, as rats will be attracted to these leftover food sources."