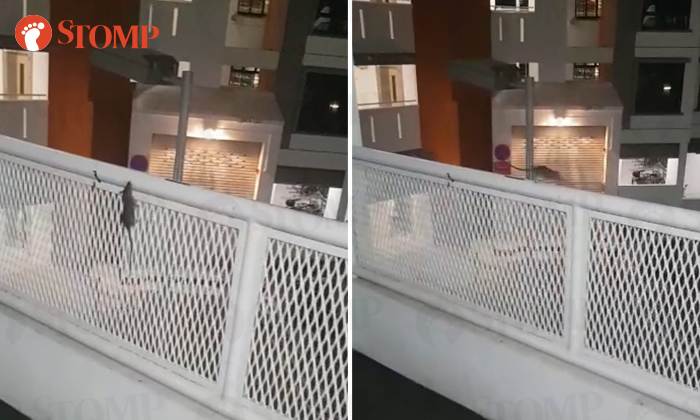 Nee Soon Town Council has arranged for pest control treatments to be done on a weekly basis after a Stomper shared a video of a rat scurrying around in a Yishun carpark.

Stomper Bugatti had just parked his car at level 2B of a carpark at Block 813 Yishun Ring Road when he heard some "running steps".

He told Stomp: "It was about 8pm on Saturday (Oct 12) when I was waiting for my friend in the carpark.

"I don't live in the area. I was waiting for my friend who's a resident there. I parked my car and after getting out, I heard some running steps. I started looking around and saw something go past my eyes really quickly.

"I went nearer and noticed that it's actually a rat."

Bugatti also contributed a video and some photos of what he saw in the carpark.

The Stomper added: "I was with my kids at the time. They were rather scared when they saw the rat since it's their first time seeing a rodent like this up close.

"The rat seemed like it didn't know which way to go. It was climbing up the fence, running here and there."

"Our officers were deployed to check on the same day, but there was no rat spotted.

"There was also no food source or rubbish found in the carpark.

"However, we do observe that the shops near Block 813 may sometimes leave their bags of food waste outside our central refuse chute located near the carpark.

"This could potentially attract rats into the area.

"We have spoken to the shops and advised them practise proper waste disposal into an enclosed rubbish chute.

"In view of residents’ concern, we have also arranged for pest control treatments to be done on a weekly basis.

"The Town Council will monitor on the situation closely.

"Residents are encouraged to contact us at 6758 0129 should they observe rats in their estate."