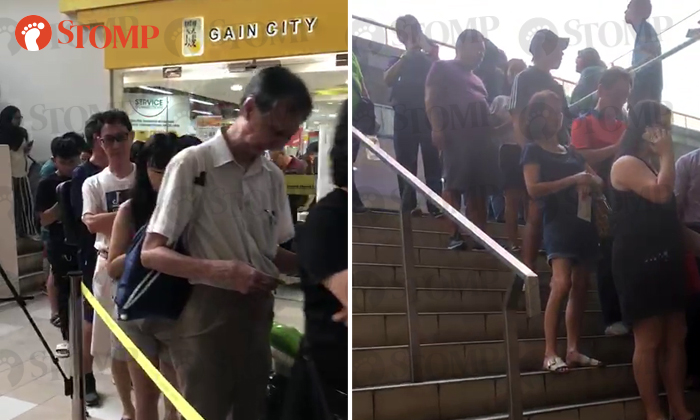 Did you go on a shopping spree during 9/9 sales on Monday (Sep 9)? These people at Tampines 1 seem like they did.

Stomper Shadow, who works in the shopping mall, was amused when he saw an extremely long queue at electronics retailer Gain City in the evening.

A video that he shared shows the queue starting from the store front on the basement level, up a staircase, on the ground floor, and ending only at the entrance of Tampines MRT station.

Shadow told Stomp: "I checked with the store manager and was told that it was the Gain City Members' Night yesterday from 6pm onwards.

"All members who received an invitation letter could come to Gain City outlets.

"They could get a 32-inch television set at $99 each, with limited stock.

"There were also Batam ferry tickets for all members even if they did not purchase anything. The tickets were of unlimited stock so 100% of customers who queued up received the tickets."

Shadow said he did not join the line as he was not a Gain City member, adding: "I thought it was quite funny as there were hundreds of people and it took me a few minutes to reach the end of the queue.

"It was longer than when McDonald's sold Hello Kitty last time."

Related Stories
Crowds enjoy favourite pastime of queueing for clearance sales at The Centrepoint
Long queue outside Uniqlo store for KAWS T-shirts: 'I feel that it's a waste of time', says Stomper
Crowds rowdy after queueing for $54 Huawei phone, several outlets closed for 'security reasons'
More About:
queue