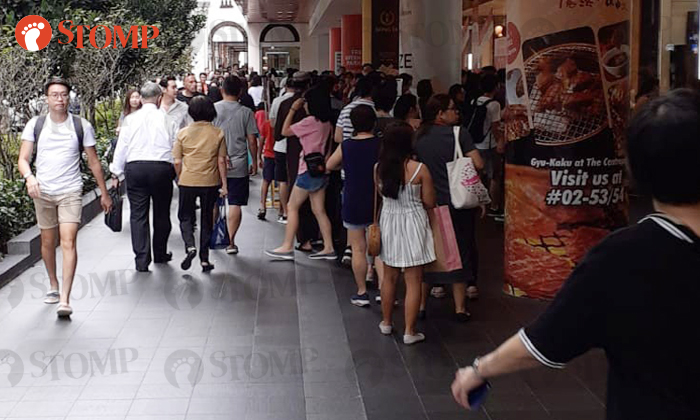 The Centrepoint is one of many shopping malls in the glitzy Orchard Road area -- but has suddenly become extra attractive to the masses after it was announced that some of its tenants would be moving out.

Metro, which spans six floors at the shopping centre, has been advertising clearance sales of up to 85 per cent off after it was reported that the store will be operating till Sep 15.

Meanwhile, the Times Bookstores branch will be closing on Sep 23 and has announced moving-out sales with discounts of up to 50 per cent.

Stomper Jey was passing by The Centrepoint on Saturday afternoon (Aug 31) when he saw a large crowd queueing outside the mall.

He said: "I think it's because of Metro's sales and they seemed like they were queueing to enter."

It has been speculated that low traffic at the mall may have been behind Metro's decision to leave.

According to The Straits Times, four other tenants, including restaurant Crystal Jade Kitchen and toy store The Better Toy Store, have moved out in the last three months.

A spokesman for The Centrepoint said it has plans to introduce "experiential retail concepts with new lifestyle offerings", in line with the larger rejuvenation of the Somerset precinct as a youth hub.

There will reportedly be a new anchor tenant with "an immersive and experiential concept" as part of the change.

Related Stories
Long queue outside Uniqlo store for KAWS T-shirts: 'I feel that it's a waste of time', says Stomper
The Singapore spirit: Guess what these people are queuing for at Northpoint City
Crowds rowdy after queueing for $54 Huawei phone, several outlets closed for 'security reasons'
More About:
queue