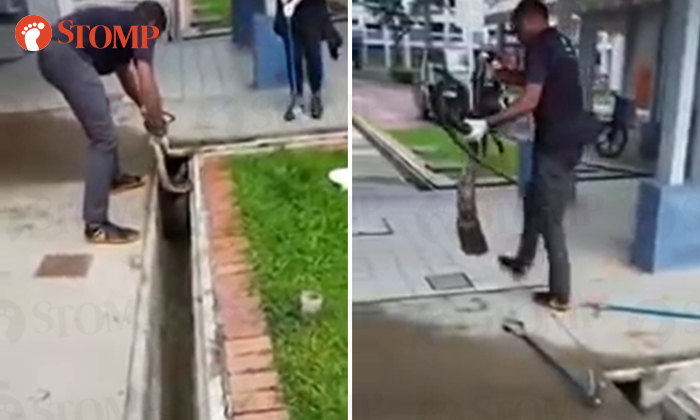 A python measuring around three-metres long was recently rescued by Animal Concerns & Research Education (ACRES) after it had eaten a cat in Jurong West on Thursday (Oct 17).

In a YouTube video Stomper James shared, a man from ACRES can be seen rescuing the python from the drain.

According to ACRES' deputy chief executive Mr Kalai Vanan, the python measured to be about 2.5-3 metres long.

Responding to a Stomp query, Mr Kalai said: "The ACRES wildlife rescue team received a call about a python at Jurong West between 5-6pm on Oct 17.

"We understand that the cat feeders in the area were looking for their community cat when they discovered the snake. Unfortunately, the python had eaten the cat.

"Pythons have adapted well to urban areas and mostly feed on rats. However, when the opportunity rises, they do go for cats who frequent drains.

"The recent wet weather may result in increased snake sightings as flooded drains and cooler weather may cause snakes to find warmer areas."