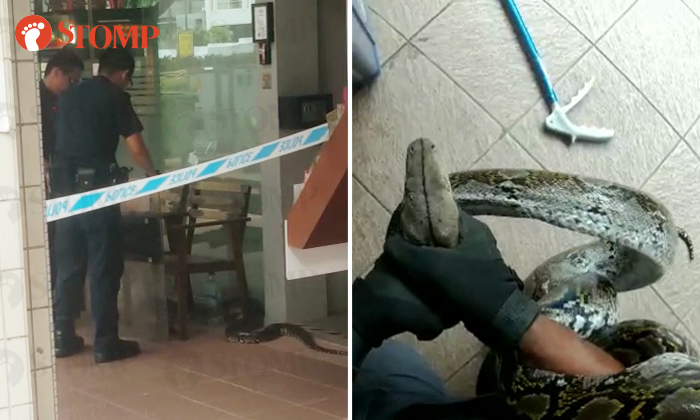 A large python was rescued from outside a hostel along Beach Road on National Day (Aug 9).

Stomper Sam saw the reptile outside Five Stones Hostel at around 8am on Friday and said it was at least 2.5 metres in length.

A video that he submitted shows police officers at the scene and the area being cordoned off.

Sam told Stomp: "Staff from the Animal Concerns Research and Education Society (Acres) were also there and the hostel's doors were shut.

"I wonder how the snake even got to Beach Road."

In a video taken at the scene, Mr Kalai can be seen handling the animal while speaking to a large crowd. He was explaining the python's behaviour and traits to them.

And while it might seem like the python was constricting and hurting its handler, that is far from the case, said Mr Kalai.

He told Stomp: "I purposely let it coil around me to show how these animals need our respect, compassion and proper handling."