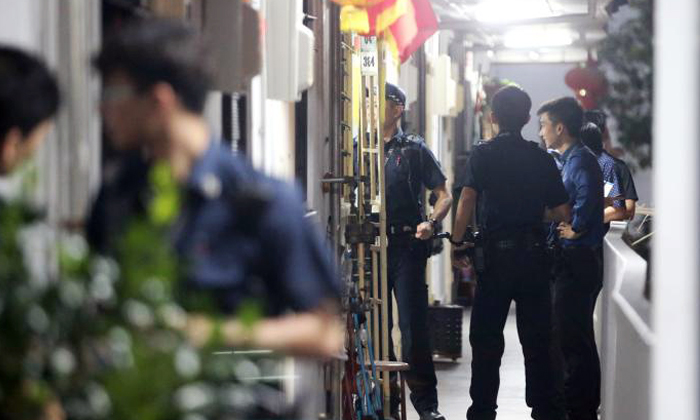 A woman brandished a knife while kicking up a ruckus in her flat at Block 6 Jalan Minyak and was arrested following a stand-off that lasted close to five hours.

The incident occurred on July 20 at around 5pm, in a fourth-floor unit.

The Singapore Civil Defence Force (SCDF) told Stomp that it responded to the incident at about 6.15pm.

Upon their arrival, the SCDF set up two safety life air packs and deployed a rescue net.

A police cordon that was around the size of three basketball courts had also been set up at the block, reported Shin Min Daily News.

Another resident, who declined to be named, reported hearing a female voice shouting from the fourth storey.

"About 20 police officers were manning the fort along the corridor. Residents entering and leaving the block had to show identification," added the resident.

"There were also a few negotiation experts who were trying to communicate with the woman in English and Mandarin."

According to Shin Min, the woman was agitated and had been holding a knife. At one point, she was also seen lying down on the the floor of her living room.

After negotiation experts spent over four hours speaking to the woman, the police engaged the services of a locksmith, forcing open the flat's metal gate and wooden door.

The woman was subdued and taken away in handcuffs at around 10pm.

In response to a Stomp query, the police said they were alerted to a case of attempted suicide at the block at 5.35pm.

"A 55-year-old woman was subsequently arrested in relation to the case," they added.

A resident on the same floor, who did not want to be identified, said the woman had been living there for over 20 years.

Describing the woman as being pretty and slim, the resident also said that everyone in the block called her a "beauty".

"She was alone when she moved in with her son. Although usually quiet, she was friendly, and spoke both English and Mandarin well," revealed the resident.

"However, there was no sight of her son during the incident."

According to the resident, the woman is believed to be a single mum who was diagnosed with depression in recent years.

Her son, who is currently around the age of 30, had moved out a few years ago.