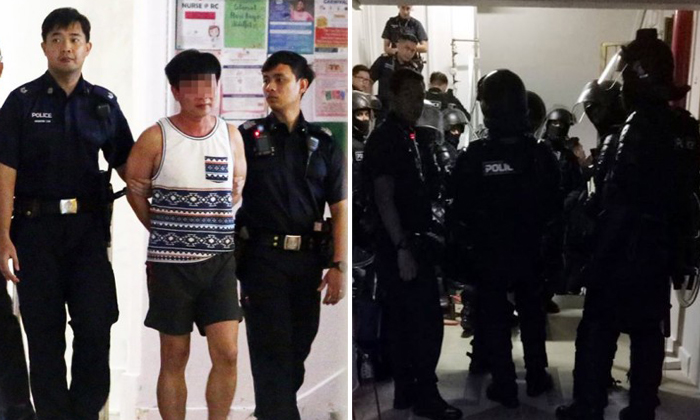 A 45-year-old man was arrested after barricading himself in his flat at Block 62 New Upper Changi Road for ten hours on Tuesday (June 12).

Police and the Singapore Civil Defence Force (SCDF)'s Disaster Assistance and Rescue Team (DART) responded to the incident, leading to a stand-off that lasted from around 5pm to 3am.

According to Shin Min Daily News, the man is believed to have been discussing money matters with his family when a dispute ensued.

This caused the man to turn aggressive, which frightened his family.

Worried that the man might harm himself, they called the police.

However, when officers arrived at the scene, the man refused to open the door. Instead, he locked himself in.

Police tried convincing him to open the door, but the man allegedly threatened: "I'll use an axe to hack whoever comes in!"

He also said he would use the axe to hurt himself, reported Shin Min.

Reporters noted that the man had turned off all the lights, leaving his house in darkness.

Negotiation experts were also at the scene, and an inflatable safety life air pack was set up at the foot of the block.

At around 1am, the man turned on a light in his house, but refused to yield.

After nearly 10 hours since the incident first started, armed policemen entered the unit. The man was eventually subdued.

In response to a Stomp query, the police said they were alerted to a case of attempted suicide and criminal intimidation at Block 62 New Upper Changi Road at 5.38pm.

"A 45-year-old man was arrested in relation to the case," added a police spokesman.

Shin Min added that the man has been married twice.

His second marriage was to a woman from China eight years ago. They have a child together.