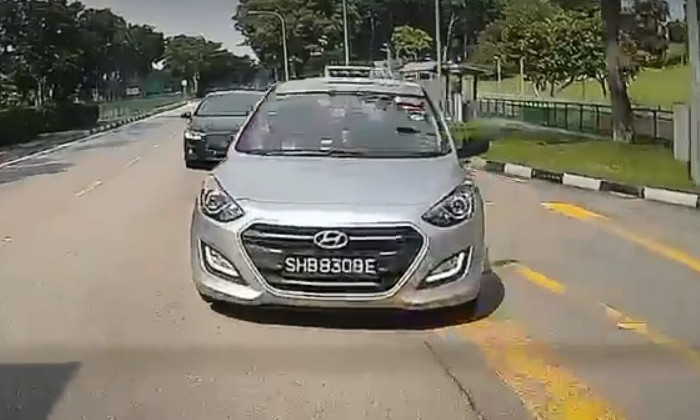 An altercation between a female motorist and a Silvercab driver had led to the latter behaving in an "unruly manner" that was captured on video, said Premier Taxis in response to queries by Stomp.

The cabby, with licence plate number SHB8308E, was seen engaging in a "blocking and braking game" against a female car driver on Oct 19, at around 3.41pm.

The incident, which occurred along Loyang Avenue towards Pasir Ris, was captured on Facebook user Daniel Lim's dashboard camera.

It showed how the cabby repeatedly switched lanes to block the female driver behind him.

It was also re-uploaded by various Facebook pages such as ROADS.sg and SG Road Vigilante.

When contacted by Stomp, Mr Lim said: "After the taxi sped off, the black car drove beside me and I saw the female driver.

"I told her that I would send my video to the Traffic Police. But as my video file is too big, I shared it on social media for the moment."

In response to a Stomp query, Premier Taxis said that it had spoken to the two parties involved in the incident, both of whom confirmed that there was an earlier altercation that led to the events in the video.

A spokesman told Stomp on Monday (Oct 22): "We have engaged the driver and understand that prior to the incident recorded and circulated on Facebook, there had been an altercation between the parties which triggered our driver to behave in an unruly manner.

"The driver had immediately admitted to us on his wrongdoing and was remorseful on his behaviour. He had accepted our stern reprimand on his unacceptable behaviour.

"He had also requested the company to convey his sincere apologies to the other party, and humbly informed us that he shall accept any disciplinary actions the company may take against him.

"The other party involved in the incident had also written in to us earlier.

"In our subsequent follow-up with her for her account of the incident, she agreed that there was an earlier incident prior to the events recorded in the video."

The female driver said that her main intention of writing in to Premier Taxis was to highlight the incident to the company's management so that the cabby could be counselled on his "unruly behaviour", according to the spokesman.

"She had reiterated that it is not her intention for us to take actions that may affect the driver’s source of income," the spokesman added.

"Premier Taxis wishes to reiterate that we do not condone unruly behaviour of any of our business partners. We will not hesitate to take necessary actions to protect the interest and safety of our commuting public.

"To accede to the request of the other party, we shall closely monitor our driver to ensure that his behaviour is in accordance with our code of conduct in serving our commuting public."