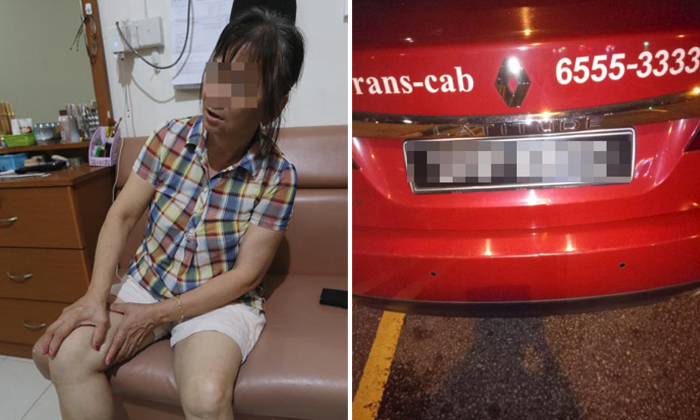 What began as a night of fun for a woman became marred when she got into a dispute with her taxi driver, who allegedly flared up at her and drove to the police station.

Ms Mary Chen told Lianhe Wanbao that she was at Sentosa with her 63-year-old sister on Sep 15 and had flagged down a cab to go home at around midnight the following day (Sep 16).

However, this angered the cabby, who reportedly said that his taxi had just undergone repairs and to file a complaint with his company if she was dissatisfied.

"I was uncomfortable by how he reacted. However, I continued with the ride as I thought it would be too troublesome to hail another cab," added Ms Chen.

The two got into a dispute again after the cabby dropped off Ms Chen's sister in Redhill.

According to Ms Chen, the cabby asked for her preferred route home to Pasir Ris. As she was not clear about it herself, she requested for the driver to take the shortest route.

She added: "I felt that he took a route that I wasn't familiar with, so I enquired about the location. However, he started getting angry again."

Ms Chen alleged that the cabby called her long-winded and asked why she did not specify which route to take, apparently even telling her to go to the police station if she was upset.

He then sent her straight to Pasir Ris Neighbourhood Police Centre and entered the police station himself, said Ms Chen.

As she did not understand English, Ms Chen was unable to understand what the taxi driver told the police.

When the cabby exited the police station, Ms Chen hurriedly paid him a fare of $39. She then left in another taxi, the ride costing her $9.

Ms Chen, who sprained her knee in the process, said she was surprised when she looked at the taxi receipt after the incident and saw that it listed the airport as the pick-up point.

She felt that the taxi driver was dishonest but did not know how to file a complaint.

Feeling wronged and worried, Ms Chen said she was unable to sleep the whole night, adding that she was saddened at how her night of fun turned out.