Man takes pot from entrance of Stomper's home after throwing plant by roadside: "They cost about $200" 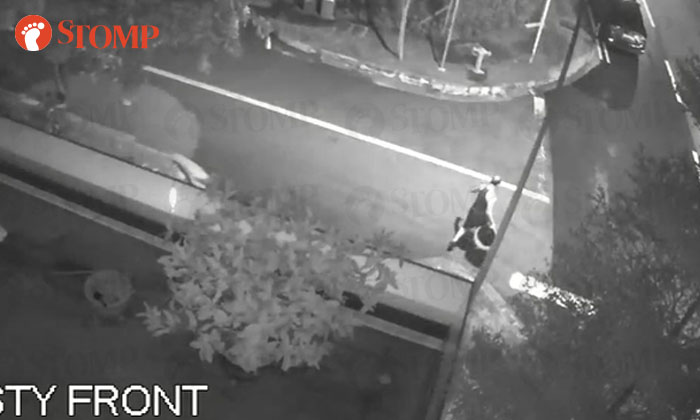 A Stomper had his plant killed and its pot taken from the entrance of his home along Flower Road in Kovan.

The total cost of the two reportedly amounted to about $200, said the Stomper.

According to the timestamp in his surveillance footage, the incident took place at 12.33am in November last year.

In the footage, a car is seen stopping by the roadside.

The driver, a bald man dressed in singlet and shorts, then emerges from it and heads towards the Stomper's residence.

He briefly scans his surroundings before bending down.

The man is out of the camera's view for a few moments and he is later seen heading back to his car with an empty pot, which he then places into the boot.

The Stomper said he had made a police report on that day itself.

"It was my first time seeing this guy. He thought nobody saw but I got cameras everywhere," he said.

"It's already been a year and I still haven't gotten my pot back. The worst thing about this [situation] is the plant, it's dead already.

"I didn't think to post this on Stomp then. But I'm sharing it now because I thought to warn those staying around Kovan, in the area of Flower Road and Richards Avenue, to be careful of their flower pots or other decorative items.

"I hope the guy gets penalised."

Related Stories
Man takes 71-year-old volunteer's $849 phone while she was giving haircut to elderly man
Man, 23, arrested after seen taking iPhone from Yishun shop counter while staff were busy
Man trips and gets pinned down after theft at Clementi Mall, arrested for various offences
More About:
theft
stealing
flower pot