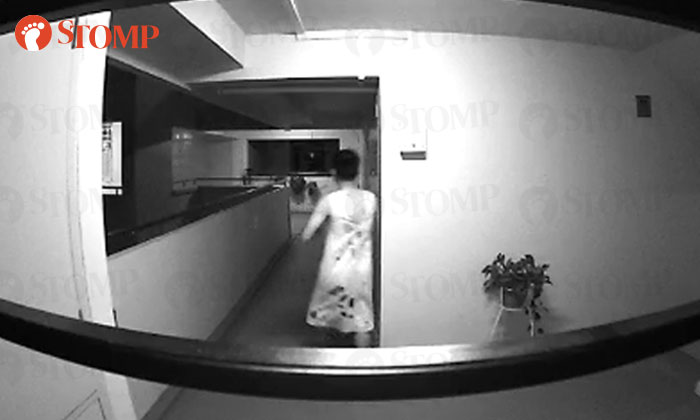 The police are looking into a series of incidents where a stranger has been seen loitering around the common corridor of Block 569 Hougang Street 51.

One of the residents at the block, Stomper Ivan, alerted Stomp to the situation and shared three clips of the same man walking around his floor from his home security camera.

In the videos - taken on Jan 17, Feb 5 and Feb 6 - the man is seen walking along the corridor and up and down the stairs.

In the first couple of clips, he is wearing regular clothes but in the latest footage taken on Feb 6 at about 8.05pm, the man appears to be wearing a woman's dress.

According to Ivan, residents at the block have noticed the man loitering around from June, 2019.

"He usually comes around 7 to 10pm because it is most quiet on my floor and on the floors above and below mine," the Stomper said.

Ivan told Stomp when his camera alerted him there was movement outside his unit on Feb 6, he immediately exited his home and followed the man to the staircase.

"I stood at the top of the stairs looking down at him and asked him what he was doing," he said.

"He was in the midst of changing out of his dress and into a T-shirt and jeans.

"He kept saying 'sorry' and using his hand to cover his face instead of answering my questions."

Ivan added that he noticed a hammer and another long metal tool poking out of the man's backpack as he was changing his clothes.

"I told him to wait and rushed back home because I wasn't wearing a shirt and I did not have my phone with me.

"When I came back, he was gone.

"I then took the lift down to look for him and saw a man on a bike about 30 metres away.

"I knew it was him because he looked back at me and took off."

Ivan ran after the man for several metres but could not catch him.

He then called the police and made a report.

"I'm concerned for the safety of our homes as I suspect the man was attempting to break into one of the units," he said.

"My neighbour's home is quiet at the time the man usually comes and he was seen in the video peeking at their flat.

"Fortunately, my home has a dog and a security camera."

The police confirmed a report was lodged and investigations are ongoing.