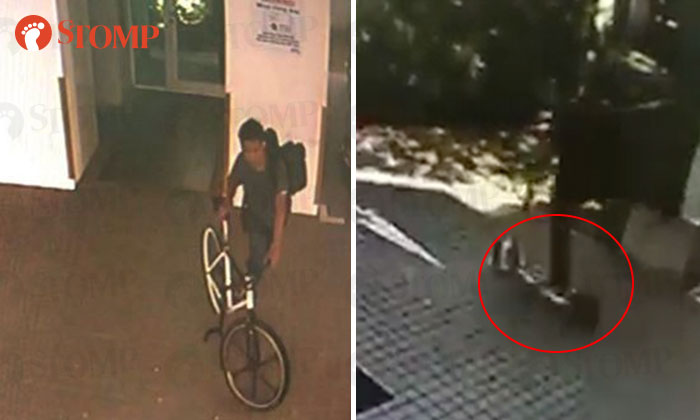 A food deliveryman was caught on closed-circuit television (CCTV) taking an electric scooter from a private estate in Kovan.

Stomper JT, who stays at 3 @ Sandilands, told Stomp that his E-scooter, an Inoki Quick 3 model, was taken by the man on Monday (Jan 22).

The incident happened at around 2.30pm, and the timestamp on the CCTV was wrong.

In the footage provided, a man carrying a large black and silver bag is seen alighting from a light, before getting onto his bicycle.

He then cycles out onto the road.

Moments later, the same man returns, and this time, he leaves with riding an e-scooter.

According to JT, the e-scooter had been placed next to the lift, barely visible in the CCTV footage.

JT said that a neighbour from a different floor in his block had placed an order for a food delivery, but he wasn’t sure who it had been.

“I later asked the neighbours living on the same floor as me, but they told me that none of them had ordered anything that day.

“My place is quite a distance away from the main road, so I can imagine he would have taken close to 20 minutes to get out carrying the e-scooter. I was out for lunch at the time of the incident or I would have bumped into him.”

“The police confirmed that a report was lodged, and investigations are ongoing.”