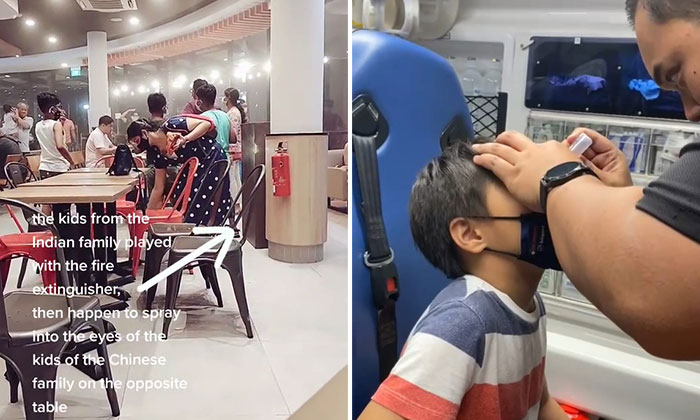 The police are investigating an incident where a child allegedly sprayed a fire extinguisher at two other children in a Burger King outlet at East Coast Park on Sunday evening (May 22).

A series of TikTok videos were uploaded showing an argument that had erupted between two families after the alleged incident happened.

According to the videos, TikTok user Kakading said a child was allegedly playing with a fire extinguisher that was attached to a pillar in the Burger King outlet and had accidentally sprayed it at the other children.

A woman who is believed to be the mother of one of the children is heard shouting: "You all [can't do this]!"

A man, presumed to be the first child's father, repeatedly apologises to the other family.

In another video, police officers and paramedics are at the scene. According to Kakading, they arrived within 10 minutes of being called.

"He looked clearly scared when Kid A's parent (the victim's parents) shouted at them, preventing them from leaving, while calling the police.

In response to a Stomp query, the police said they were alerted to a case of rash act at 902 East Coast Park at about 7.35pm.

Part 1 22 May 2022. A day that ended badly, with inconsiderate fellow diners and an irresponsible dining establishment....

She said she was waiting for her family's order at the counter when she heard an explosion.

"There was suddenly a lot of white and powdery smoke coming from the left side of where we were standing (where my parents and the children were seated).

She rushed back to the table and found that the fire extinguisher had been activated by a boy she believes to be around 10 to 12 years old.

She said her mother, older twin daughter, and nephew were seated next to the extinguisher and the nozzle was facing them.

"Unsurprisingly, the white smoke affected my older girl and nephew," she said.

"My girl, who just started talking proper words barely a month ago, was mumbling 'itchy itchy' while rubbing her eyes.

"My nephew was rubbing his eye frantically and his eye turned red.

"I shouted loudly to ask my [sister-in-law] to quickly bring him to a washroom to rinse his eye."

She then alleged that two adult males from the boy's family walked over and said the boy was mischievous but that it was a "small matter" before attempting to leave the restaurant.

"From fumbling, I became surprised and subsequently angry," Irene said.

"That they kept harping that this incident was a small matter was not helping.

"Given their attitude and because two children were affected, I called the police at 7.30pm."

She added that no staff from the fast-food outlet came to assist her family.

When she and her husband called the manager out, he allegedly said "the safety pin was missing and hence not the restaurant's fault".

"I was glad my hubby responded that Burger King, being the premise owner, should ensure the fire extinguisher is secured so that it could not be abused."

She said after the police and paramedics arrived, they were advised to monitor the children over the next two days for reactions from the extinguisher's chemical agents.

In the end, the family had their dinner after 9pm and reportedly did not receive their full order.

In response to a Stomp query, a Burger King spokesman said: "Burger King Singapore is aware of the incident that occurred on Sunday, May 22 at Burger King Coastal Play Grove.

"We have launched an internal investigation to better understand the incident and we have reached out to Ms Lim directly."